Ticket to final round on the line

Ticket to final round on the line 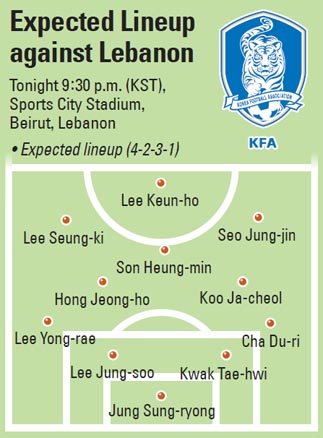 Korea looks to clinch a spot in the final round of the 2014 FIFA World Cup Asian qualifiers against Lebanon tonight with a few changes to the lineup that beat the United Arab Emirates last week.

Ranked 31st in the FIFA rankings, Korea currently sits atop Group B with 10 points - three wins, one draw and no losses - followed by Lebanon (7), Kuwait (5) and the UAE (0). A win against Lebanon will ensure advancement to the final round regardless of the results of other matches.

Korea thrashed Lebanon 6-0 in September, but this time the squad must travel to the Middle East and faces a team with a different feel - Lebanon has two wins and one draw in its last three qualifiers.

The Taeguk Warriors will also be without Celtic FC midfielder Ki Sung-yueng, who has been sidelined by an illness, and Arsenal striker and team captain Park Chu-young, who will miss the match after receiving his second yellow card of the qualifying campaign against the UAE last week.

To minimize the impact of the void left by these key players and get the precious victory that will see Korea qualify, coach Cho Kwang-rae decided to make a few changes to the lineup.

Cho said over the weekend that he will start Lee Keun-ho as striker while sending Ji Dong-won to the bench since the Sunderland striker has been out of form.

Lee, who plays for Japanese club Gamba Osaka, scored a late goal in the 2-0 victory against the UAE and will be supported by Hamburg forward Son Heung-min. Son, 19, assisted Park’s goal last week after coming on as a second-half substitute.

“Keun-ho moves a lot in front, so he will create more space for [Son],” Cho said to local reporters yesterday. “Since Son understands the team tactics well, I think it will work.”

On the flanks, Cho will play Gwangju FC’s Lee Seung-ki on the left side, while Jeonbuk Hyundai Motors’ Seo Jung-jin will take the right wing. Both have little experience at the international level, but Cho said that they will create good chances.

“I’ve played both flanks and attacking midfielder for my club,” said the 23-year-old Lee. “Coach told me to follow team plays and then create goal-scoring chances from the flanks.”

In the midfield, Cho is expected to pair Jeju United defensive stalwart Hong Jeong-ho with Koo Ja-cheol, who played attacking midfielder in the last qualifier.

Hong, 22, is originally a center back, but has shifted his position to defensive midfielder, where he played against the UAE last week.

Pundits commented that although Hong lacked passing skills and failed to create many attacking chances, he has done his job well defensively.

“In the match against the UAE, I only focused on playing defense right,” Hong said. “But I want to perform better against Lebanon.”

Hong’s partner in the midfield, Koo, is expected to be a ball distributor in the middle of the pitch, which Korea missed in the match against the UAE. Both know each other well from playing together on the Olympic team and also in the K-League before Koo departed Jeju United for Germany’s Wolfsburg in January of this year.

With Koo playing alongside Hong, Suwon Samsung Bluewings workhorse Lee Yong-rae, who used to take charge of the midfield with Ki, will move to the left-back position, where he played late in the second half of the UAE match. The 25-year-old showed an impressive performance with an assist to Lee’s first goal.

“Coach wants me to actively participate in the attack,” Lee said. “I played left back while I was playing for Gyeongnam FC, so I’m familiar with the position.”

Lee will be a critical part of the four-man back line that includes Lee Jung-soo, Kwak Tae-hwi and Cha Du-ri.

Meanwhile, coach Cho warned players about the conditions of the pitch in Sports City Stadium in Beirut, Lebanon, saying it can create irregular bounces of the ball.

Korea has never lost to Lebanon in the teams’ seven matchups, winning six games and drawing once. The team has netted 15 goals, while surrendering only one.