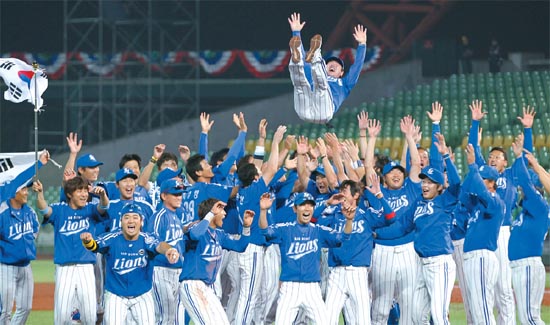 
For Daegu Samsung Lions manager Ryu Joong-il, this must be the year that he can never forget.

It was the moment that Ryu achieved a triple crown in his rookie year as a manager. The Lions already won the regular season and the Korean Series in the Korea Baseball Organization (KBO) before claiming the international tournament.

“I’m happy that we are the first Korean club to win the title,” Ryu said after the game. “What makes me more happy is that we won against Japan.”

The Lions suffered a 9-0 shutout against the Hawks in the round-robin qualifying stage on Saturday. Ryu claimed the defeat was all planned to explore the opponent’s tactics, but some fans were in doubt, speculating that the 48-year-old was just making an excuse for the big loss.

However, on Wednesday, Ryu proved he wasn’t bluffing at all. With an impressive performance from starting pitcher Jang Won-sam, who was named tournament MVP, and outfielder Jung Hyeong-sik, who delivered a critical two-RBI single, the Lions were a different team from the qualifying stage.

In this tournament, the Lions were denied the opportunity to play with their best lineup as starting pitchers Cha Woo-chan, Yoon Sung-hwan, Justin Germano and Doug Mathis were all ruled out due to injury, military service or personal reasons.

Making this worse, catcher Jin Kab-yong and second baseman Shin Myung-chul were ruled out just before the final because of injuries, and even right fielder Park Han-yi was forced to leave the game after hurting his knee during the first inning.

The tournament seemed to be going against Ryu’s plan when the team gave up their first run to the Hawks in the bottom of the first inning. But the Lions started to claw back.

In the top of the fifth inning, the Korean champion collected five runs to make the score 5-1. After capturing the lead, Ryu used his bullpen pitchers - Jong Hyun-wook, Kwon Hyuk, and Oh Seung-hwan - to seal the victory.

Oh, the Asian record holder with 47 saves, gave up two runs in the bottom of eighth inning to the Nippon Professional Baseball (NPB) champion, but the Lions were able to hold onto the lead until the final minute.

“I think we gained lot of confidence after lifting the trophy in a difficult situation,” Ryu said. “Jang threw really well and our batters were able to produce five runs, which gave us momentum to win.”

With the win, the Lions finally broke the dominance of Japanese clubs in the Asia Series. Until Wednesday, Japanese clubs have swept all four previous editions. But Ryu, who spent 24 years with the Lions as a player and coach, said the victory doesn’t mean that Korean baseball is superior to Japanese baseball.

“We won against the Hawks, but Japan plays really good baseball,” Ryu said. “I don’t think we are better than Japanese baseball, but I would like to say we are now close to their level.”

After claiming the continental club championship title, Ryu revealed he now wants to aim for a higher level.

“If I get the chance, I want to manage the national team and win the Asian Games, the Olympics or the World Baseball Classic (WBC).”

Ryu has previously served as an assistant coach with the national team.

In 2006 and 2009, he participated in the WBC with Korea and last year he was with the gold-medal winning Korea team in the Asian Games in Guangzhou, China.