Shin proving to be MVP-caliber star

Shin proving to be MVP-caliber star 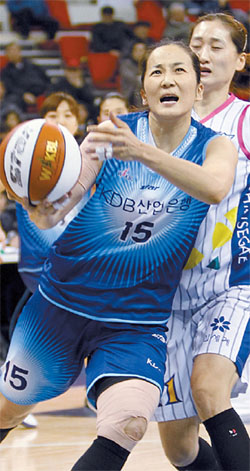 After her best performance of the season to start off the new year on the right foot, Guri KDB Life Insurance Winnus center Shin Jung-ja still isn’t satisfied. She’s striving for the season’s top honor: becoming the most valuable player in the Women’s Korea Basketball League.

In the first WKBL game of 2012, Shin scored a career-high 27 points and collected 12 rebounds to lift the Winnus’ over the Bucheon Shinsegae Coolcat 88-59 on Monday. Shin, who was named the fourth round MVP last week, has been impressive throughout the season.

The 32-year-old veteran is currently leading the league in rebounds (13 per game), team efficiency (911.80 points) and playing time (38 minutes, 38 seconds per game). Shin’s scoring average of 14.61 points is ninth in the league.

Despite these numbers, Shin isn’t confident about winning the MVP award as history has shown that those who lead their teams to the championship receive the honor in the end.

Since Coolcat forward Jung Sunmin was named the MVP in 2002 after her team finished second, all MVP winners have come from the championship team.

Last year, Shin topped the league in rebounds and defensive contributions and was included in the season’s Best 5 list, but the award went to champions Ansan Shinhan S-birds center Kang Young-suk.

This season, Shin’s Winnus is 5.5 games behind the S-birds, who stand at an impressive 20 wins and three losses this season. Although snatching the trophy from the S-birds doesn’t look like an easy task, Shin said she will try hard until the end.

“I did expect a little to win the award last year, but I didn’t,” Shin said to Ilgan Sports, the JoongAng Ilbo’s daily sports newspaper. “This season, I want to be named the MVP and win the championship at the same time.”

Shin started her professional career with Kookmin Bank in 1999. Her performance took off after joining the Winnus in 2006. She evolved into a rebound specialist, claiming rebound titles for four consecutive seasons, the first player to do so in league history. The 185-centimeter (6-foot, 1-inch) center also holds the WBKL all-time record in rebounds, meaning the number is still rising.

Since 2007, Shin has had consistent double-doubles. With two months left to the end of the regular season, Winnus coach Kim Young-ju said Shin deserves to win the award.

“As a veteran, Shin leads young player well, and her skills are mature,” Kim said. “I really want her to win MVP this time.”