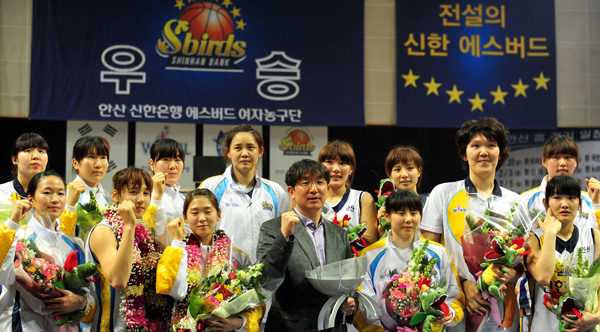 The S-birds took the title among a subdued atmosphere as Guri KDB Life Winnus, the team pursuing the S-birds, lost to Yongin Samsung Life Bichumi 62-58 on Sunday, handing them the title. The Winnus, who now has 20 wins and 14 losses, have six games left to play, but can’t catch the S-birds.

The S-birds planned to celebrate the title win in front of home fans at Wadong Gymanasium in Ansan, Gyeonggi, yesterday, with a victory against Cheongju KB Stars, but the atmosphere was further dampened as it lost the game 80-74.

Even so it is still an incredible achievement, and one that has never before happened in either of the four major professional sports in Korea.

In baseball the Haitai Tigers, now the Kia Tigers, won the KBO season title four years in a row from 1986 to 1989, while in volleyball, the Samsung Fire Bluefangs claimed the regular season title for nine consecutive years from 1997 to 2005, though that was achieved during the amateur days. The Korean Professional Volleyball League (V-League) started in 2005.

The S-birds has been the dominant team since coach Lim took the helm in 2007. The 47-year-old has not let the regular season title or championship trophy out of his hands since claiming it for the first time and he is already half way to securing another season at the very top of women’s basketball.

“Before the season, I thought having a sixth consecutive title would be difficult because other teams got better,” Lim told to Ilgan Sports, the JoongAng Ilbo’s daily sports newspaper, after his team was confirmed as the regular season champion on Sunday. “The support from the fans and the effort from the players won us the title, and since we have come this far I want to win the championship trophy as well.”

The S-birds was expected to be weaker than the last season because veterans Chun Joo-won and Jin Mi-jung retired, while forward Jung Sun-min moved to the Stars.

But it turned out that Lim is as good at rebuilding as he is at coaching. While last season’s MVP Kang Young-sook stepped up as a core player, and forward Kim Dan-bi, and guards Choi Yoon-ah and Lee Yeon-hwa have been become key players under Lim’s guidance.

For Lim, all the players have contributed to the triumph, but if he had to pick one, the coach said he would have to name the 202-centimeter (6-foot-7-inch) center Ha Eun-joo.

Ha, the 28-year-old sister of Ha Seung-jin of Jeonju KCC Egis, has average statistics in this season (15th in scoring and 17th in rebounds) because she has spent such little time on the court to prevent injury - but when it comes to per-minute-stats, she is the top player in the WKBL.

“Ha should be the MVP this season,” Lim said. “She has showed her presence, especially in tight situations.”

With the playoffs settled, Lim has said he will now make sure the players stay in the best condition for the upcoming games.