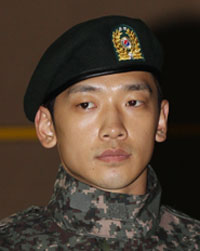 Rain has had a vacation from the Army. His first since he was conscripted, the vacation was kept away from the media until the Hallyu singer returned to the barracks. A representative from the Army told Sports Hankook that “Private Jung Ji-hoon was on vacation from Feb.9 until Feb.16, having been awarded some extra vacation time on top of his five days leave he accrued for his 100 days in the Army.”

On his first vacation, Rain spent the time at home, indulging in the food he craves as well as spending time with close friends and family members. “He did what every serviceman does on their first break, just enjoying home-cooked meals and resting,” said a representative of the entertainer.

It was assumed that Rain kept an extra low profile, never setting a foot outside his front door while on break.

Rain started his national military service on Oct. 11 last year and due to his excellent state of health and fitness was accepted in the Special Forces.