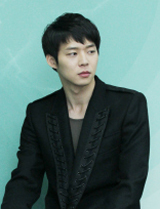 Singer Park Yu-chun returned to work on March 17 after spending some time off following his father’s death on March 14.

He was not due to restart filming of the new drama “Rooftop Prince” until March 19, but he returned to the set two days earlier than expected. The show will premiere on March 21.

“He looked haggard, but still managed to be professional,” a member of the production crew said. “He greeted all the staff and cast members and was consoled a great deal by the director and lead cast. It was a somber day at work, and the other actors seemed determined more than ever to focus on their work.”

When the news of his father’s passing broke on March 14, Park was on a plane returning from a tour in South America. It was unclear whether Park was immediately made aware of the news.

Upon returning home, Park made his way directly to the funeral parlor set up at a hospital in Gangnam District, southern Seoul, and spent the night at the hospital with his mother and brother, keeping vigil as mourners came to pay their respects. A funeral ceremony was held on March 16.