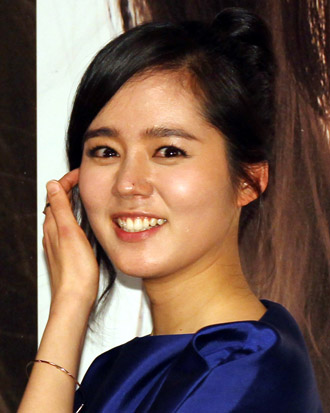 Actress Han Ga-in will appear on an episode of SBS’s “Running Man,” to the delight of the variety show’s viewers.
Han, who doesn’t usually do variety shows, recorded an episode of the show just days before her film “Introduction to Architecture” opens on Thursday. The “Running Man” episode featuring Han will air on Sunday.
In the episode, Han is re-united with comedian and show host Yoo Jae-seok, with whom she had co-starred in SBS’s “Comedy Town” more than 10 years ago. The popular actress also participates in a mission that involves putting her running skills to the test.
“I was a bit disappointed that I wasn’t able to perform to my optimum ability, but all in all I had a lot of fun and have come away with some fond memories,” Han said after the taping.
Of late, Han has moved TV viewers with her star turn in the hit MBC drama “The Moon Embracing the Sun,” which ended last Thursday, opposite actor-of-the-moment Kim Soo-hyun. The 20-part series has become one of the network’s most profitable programs.