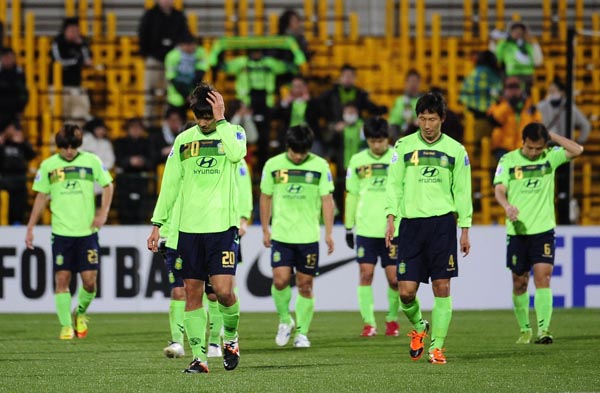 Jeonbuk Hyundai Motors players walk off the pitch after a 5-1 defeat against Kashiwa Reysol during an AFC Champions League Group H football match at Hitachi Kashiwa Stadium in Chiba, Japan, on Wednesday. [NEWSIS]


Jeonbuk Hyundai Motors FC seems to have lost its mojo. The defending K-League champions and AFC Champions League runners-up suffered their second straight 5-1 defeat in the CL group stage on Wednesday after a dismal performance against Kashiwa Reysol in Japan.

Although coach Choi Kang-hee left the team to take the helm of the national football squad, Jeonbuk was still considered a strong contender for the Asian club competition since its core roster hasn’t changed.

But without Choi, the Jeonbuk club seems to be tearing at the seams. Despite two wins and one draw in the domestic K-League, the 2006 AFC champions suffered two humiliating defeats in the Champions League and now sit at the bottom of Group H.

Just two weeks later, the Korean club lost by the same score at Hitachi Kashiwa Stadium in Chiba, Japan. Jeonbuk gave up the opening goal to Kashiwa’s Daisuke Nasu in the 40th minute, and then two additional goals to Leandro Domingues of Brazil before the end of the first half.

Chinese international Huang Bowen scored one for Jeonbuk in the 51st minute, but the visitors were unable to sustain the momentum as Junya Tanaka and Akimi Barada ensured Kashiwa would collect its first victory in the group.

Lee said that the disappointing result was not the players’ fault but rather was a failure of his tactics. The 51-year-old coach admitted that he played too defensively.

“Since today’s match was an away game, we tried to collect a draw,” Lee said at the post-match press conference on Wednesday.

“Since Kashiwa’s two foreign players have good techniques, we tried to pull down the defensive line, but I think that was the reason we picked up such a huge loss.”

Jeonbuk abandoned its usual 4-2-3-1 formation to play with a 3-4-3 formation instead.

However, the surprise tactical move turned out to be a flop as Kim struggled to find his rhythm after recovering from an ankle injury.

Coach Lee said he hopes his players will regain confidence and play better in the upcoming K-League match on Sunday. Jeonbuk travels to face FC Seoul, one of the three teams that defeated Jeonbuk last season.

“We still have four games in the ACL and will play those games with our best effort,” Lee said. “Our players may have lost their confidence after losing 5-1, but we will focus on recovering our form.”

Meanwhile, the other three Korean clubs in the ACL also had a tough week.

Seongnam Ilhwa Chunma drew 1-1 against Tianjin Teda in Group G on Wednesday, while Ulsan Hyundai picked up a point in a 2-2 stalemate against FC Tokyo on Tuesday in Group F.

The Pohang Steelers lost to FC Bunyodkor of Uzbekistan 2-0 in Group E.