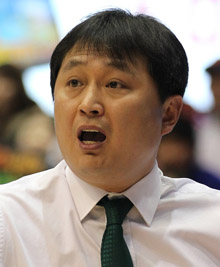 Anyang Korea Ginseng Corporation coach Lee Sang-beom must be having one of the most memorable seasons of his career.

On Saturday, the KGC advanced to the Korean Basketball League Championship Series for the first time in its history after beating the Busan KT Sonicboom 85-64 in Game 4. The team also won the best-of-five series 3-1.

The Promy, who had a historical season with the most wins in a single season (44), the longest winning streak (16) and the highest winning percentage (0.815), was expected to reach the finals, but the KGC’s chances were uncertain because of its lack of playoff experience.

With the win on Saturday, however, the team’s worries seemed to turn to hope.

“I’m happy that we’ve rewritten franchise history,” Lee said on Saturday after the game. “I really want to thank my boys. Now we have to get ready for the championship series.”

It was a special moment for Lee, who has devoted his entire basketball career to the KGC, previously known as the SBS Stars and the KT&G Kites.

Lee is a franchise star who spent 16 seasons with the team as a player, assistant coach and coach.

He began coaching the team in 2009, but has struggled to find his rhythm. For the past two seasons, the KGC has had a winning percentage of around .200. The team finished eighth in the 2009-10 season and one place lower the next season.

Though Lee has used those first two seasons to rebuild the team - hiring young players and sending veterans to other teams - it was not enough to move them up in the rankings.

“Whenever we were defeated and denounced by fans, it was heartbreaking, but I always thought about the future and believed that we could change,” Lee said. “I tried to make a team that my successor could lead comfortably, even if I left.”

Lee’s hard work has finally started to pay off. After getting the No. 1 draft pick and signing forward Oh Se-keun, the KGC finished second in the regular season with a franchise-best record of 36 wins and 18 losses, and the team is now heading to the finals.

In the regular season, the KGC only collected one victory against the Promy, but Lee said the team is ready to challenge its rival.

“If our players unite like they did today, we’ll definitely have a chance,” he said. “It’s encouraging that our players have started to regain the rhythm of playing an exciting game of basketball.”

Many fans think that Lee’s name is already engraved in KGC history after all he’s done for the franchise, but the coach said the championship trophy is a must to cap his career.

“It’s a big honor for me to have had such a good run with one team,” Lee said. “But I won’t stop now. I will try my best to make an impression in the finals.”