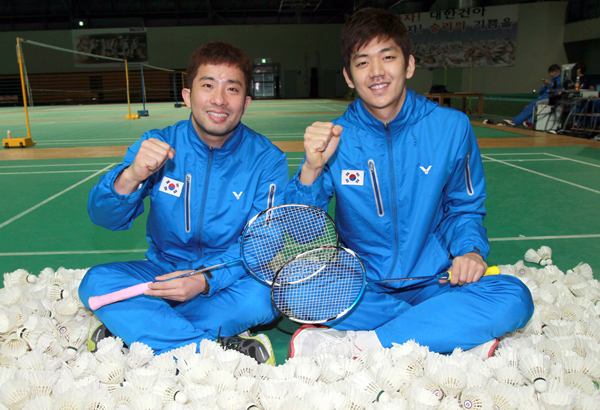 
Four years ago at the 2008 Beijing Olympics, Jung Jae-sung and Lee Yong-dae were considered favorites to win the gold medal in the men’s badminton doubles event. But they walked away in shock after a first-round defeat to Denmark.

Lee went on to win the gold in the mixed doubles with Lee Hyo-jung, but still left Beijing disappointed. With his mixed doubles partner Lee retired, the 24-year-old has focused on redeeming his early exit in 2008 at the Summer Games in London.

Lee and Jung, currently No. 2 in the world rankings, have proven they can beat any team in the world. While they lost to world No. 1 Fu Haifeng and Cai Yun of China at the Korea Open in January, they revenged their loss at the All England Open last month in Birmingham.

In an interview with Ilgan Sports, the JoongAng Ilbo’s sports daily, the two players expressed confidence in overcoming pressure this time around and smiling at the top of the podium this summer.

Q. How is your condition heading into the final stages of Olympic training?

A. Jung (J): I had a shoulder injury during January’s Korea Open, but after two months of rehabilitation treatment, I’m in my best form right now. I’m also feeling good after winning the All England Open in March.

Lee (L): Except for last summer when I hurt my elbow, I’ve always been in good form.

What is your take on winning the All England Open?

J: Winning the big tournament means something different. Since we participated in lots of tournaments in Europe, it will also help us adjust to Olympic conditions. If we overcome the pressure and show what we have, we’ll perform well. It’s our second try, so we don’t have as much pressure.

L: After the All England Open, I want to smile in August. I’ve played with Jung since the last Olympics and Asian Games, but we don’t have a gold medal yet.

Why do you guys think you lost in the first round in Beijing four years ago?

J: We had big expectations since many people thought that we were the favorites to win the gold medal. Because of the mental pressure, we couldn’t play our game from the first set. But we have accepted reality and worked on our weaknesses.

Lee got a gold medal in the mixed doubles, but Jung, you had to fulfill your military service because you didn’t win a medal. How did you cope with this?

J: It was a difficult time for me. I joined the Korea Armed Forces Athletic Corps (Sangmu) in January 2009, but during that time my wife supported me a lot. I think it actually provided a good opportunity for me. After the previous Olympics, I became more mature mentally. Now I can play the game comfortably.

Were you envious of the attention Lee received?

J: No. Lee deserved the gold medal in the mixed doubles. He is a handsome-looking guy and a star player. I don’t know what would have happened if we had won the gold in the men’s double, but I haven’t achieved anything yet. In fact, having the spotlight on me can add a lot of pressure.

How do you guys rate each other after playing seven years together?

J: Lee is tall and has had talent from the start. He has solid defense and his level of concentration is great.

L: I first played with Jung when I was a sophomore in high school. Because he has led me well, I am able to play well. Because of Jung, I stand where I am now.

What do you guys need to improve on in order to bring home the gold medal?

J: We need to focus on net plays. If we can collect points from the first volley after the serve, we can take the game easily.

L: Defense is the key. The points depend on how you play from first to third volleys. If we don’t give opponents a chance to score in that early part of the game and lead them to a long rally, we have more chances to score.

Is it true that the London Olympics are the last opportunity for you guys to play together?

J: It’s about time to give younger players an opportunity. I’m thinking about retiring after finishing with gold.