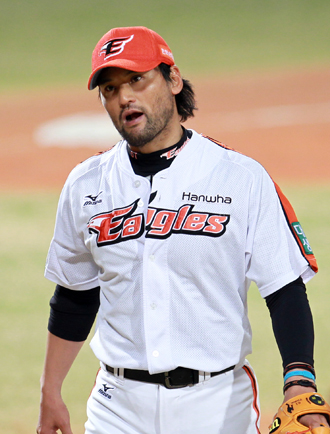 Hanwha Eagles pitcher Park Chan-ho reacts during the KBO game against the LG Twins in Cheongju, North Chungcheong, on Wednesday. By Kim Jin-kyung

Despite another quality start, Hanwha Eagles pitcher Park Chan-ho picked up his first loss of the season. Questions about the aging pitcher are rising whether his maximum pitch limit is 80.

Park, who has amassed 124 wins in Major League Baseball, the most by an Asian pitcher, lost against the LG Twins in his second start in the Korea Baseball Organization on Wednesday. The 39-year-old gave up three runs in the seventh inning with five hits, one base-on-balls and six strikeouts. The Eagles lost 6-1.

Park has one win and one loss with a 3.55 ERA. The right-hander collected his first-ever KBO win against the Doosan Bears on April 12 after allowing two runs in six and one-third innings.

At Cheongju Stadium, where a sold-out crowd of 7,500 fans flocked to see the former MLB All-Star pitcher, Park had almost perfect pitching before the seventh inning and looked certain to achieve his second straight win as the Eagles were leading 1-0.

With his combination of fastball, cut-fastball (“cutter”), two-seam fastball and changeups, Park was containing the Twins’ pitchers in the early phase of the game. After the fifth inning, he had pitched only 68 pitches (47 strikes, 21 balls) and had full power as he threw 23 fastballs which exceeded 145 kilometers per hour (90 miles per hour). However, going the through the sixth inning, Park apparently lost energy. Through the fifth inning, Park pitched 26 fastballs in 68 pitches (38.2 percent), but in his next 25 pitches, he managed to throw only three fastballs (12 percent).

The same thing happened against the Bears last week. In that game, Park’s portion of fastballs was 38.8 percent until the fifth inning, but after the sixth inning the percentage went down to 13.3 percent.

Before the game, the Eagles manager Han Dae-hwa said that Park needs to manage his total number of pitches in order to stay late into the game. But just like his first game, Park started to lose his power after reaching 80 total pitches. Pundits say that not only the speed, but also his control looked shaken as his pitch went high or outside of the strike zone.

In the seventh inning, Park’s 141-kph (87.6-mph) two-seam fastball, which was his 83rd pitch in the game, went high against the Twins’ first batter Lee Jin-young, and his next pitch - a cutter - also landed high and allowed Lee a double that passed the first baseline.

In his 85th pitch, his first against the Twins’ cleanup hitter Jung Sung-hoon, Park went with a two-seam fastball, but as the ball went over the plate, Jung blasted a home run and put his team on the board with a 2-1 score.

Park was able to force a groundball against Lee Byung-kyu with his changeup and got the first out, but then gave up his first base-on-balls to Oh Ji-hwan and was off the mound with a total of 93 pitches.

“I didn’t feel that I was tired [after 80 pitches],” Park said after the game.

Pundits claim that Park showed impressive pitches for two straight games, but that the Eagles offense wasn’t able to support Park enough and the bullpen wasn’t doing its job.

However, with Park looking shaken in the late half of the game, pundits are saying that the Eagles coaching staff may go to its bullpen earlier in the game when Park is the starter.