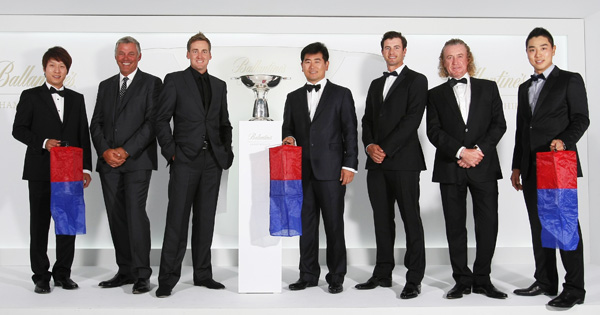 
Will it be another foreign golfer or will it be the first time a Korean golfer claims the title?

The Ballantine’s Championship, co-sanctioned by the European Tour and Asian Tour, tees off its four-day tourney today at Blackstone Golf Club in Icheon, Gyeonggi, with 156 golfers in the field.

Entering its fifth year, Koreans have never won the Ballantine’s Championship. Their best result came in 2009, when Kang Sung-hoon was the runner-up behind Thongchai Jaidee of Thailand.

Korean golfers said they are ready to capture the honor of becoming the first local to lift the trophy with the winner’s prize of 367,500 euros ($467,000) out of a 2.25 million euro purse, the biggest of any golf event in Korea.

Yang Yong-eun, who became the first Asian to win a major tournament by taking the 2009 PGA Championship over Tiger Woods, said that he is “desperate” to win the tournament.

“I’ve always gone home with bitterness after a disappointing performance here,” Yang said at the press conference on Tuesday. “But this year, I have put forward my efforts to adjust my condition as well as strengthen my mentality.”

The 40-year-old veteran has missed the cut the last two years. His best performance at the Ballantine’s is sharing 40th place in 2008. Yang, who is ranked 59th in the world, is not having a good start this season on the PGA Tour. He missed the cut in his first two PGA events, while his best finish so far is tying for 17th at the WGC Accenture Match Play Championships in February.

“I know I haven’t won PGA events after 2009 and I’m desperate to play better before I get too old,” said Yang, who will tee off with Paul Casey and Joe Kruger. “If I can, I wish to rebound my performance in my country.”

Kim Kyung-tae, currently No. 48 in the world, is also hoping for a better finish after he shared 10th place last year. The 26-year-old, who collected the most prize money on the Korea Professional Golf Tour (KGT), will play in the first round with the Open champion Darren Clarke, who is visiting Korea for the first time, and Gregory Havret.

“I have practiced my short game during the winter, so I think I can get a good result,” Kim said. “I also like this golf course, since my iron shot works well.”

PGA rookie Bae Sang-moon is also rising as the top contender to lift the trophy among Koreans. The 26-year-old, who became the second Korean to become a top prize money earner in Japan after Kim, is so far having an impressive run in the United States.

Bae, ranked 32nd in the world, has so far played 11 PGA events and has two top-10 performances including sharing second at the Transitions Championship behind Luke Donald in March. He also gained some fame by playing along with Tiger Woods at the Masters.

Bae will tee off with Alexander Noren and Adam Scott, who is visiting Korea for the first time since 2002. Scott, who works with Steve Williams, Woods’ former caddie, has the highest world ranking among the participants at No. 12.

Other Koreans include Hong Soon-sang, last year’s most valuable player in the KPGA, and Park Sang-hyun, who earned the third-most money on the KGT.