With the grouping for the 16 men’s football teams at the 2012 London Olympics now finalized, Korea is readying to win the nation’s first-ever medal in the sport.

At the group draw event held at Wembley Stadium in London on Tuesday, Korea, led by coach Hong Myung-bo, was matched with Mexico, Switzerland and Gabon in Group B.

Since avoiding powerhouses like Brazil, Spain and home favorite United Kingdom as a top seed, many consider Korea to have a good result in the draw. But instead of expressing satisfaction, Hong emphasized that it is still a difficult task.

“We should not be careless against all three teams,” Hong said. “We should make a right and strict assessment on these teams’ performances instead of evaluating based on their national images.” 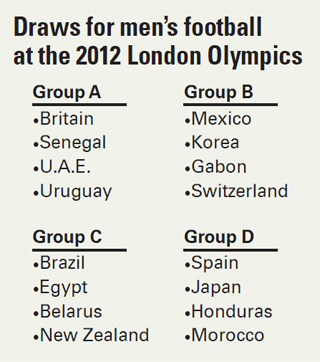 The Korean squad, which is making its seventh consecutive and ninth overall appearance at the Summer Games, will first play Mexico on July 26, followed by Switzerland on July 30.

The team wraps up the group stage against Gabon at Wembley Stadium on Aug. 2.

The Under-23 Taegeuk Warriors have a better head-to-head record against Mexico with two wins, three draws and one loss, but Hong has said that this young El Tricolor is a tough team to beat.

In fact, Mexico U-23 coach Luis Fernando Tena recently said that he may call up Manchester United striker Javier Hernandez, also known as Chicharito, as a wild card player. Each team is allowed to include three players older than 23, referred to as “wild card” selections.

“I had a chance to see their qualifier and we need a lot of preparations for this team,” Hong said. “Especially, the Mexican players’ individual techniques were beyond my imagination.”

The Korean Olympic team has one victory against Switzerland, who was the runner-up behind Spain at the UEFA U-21 Championship - which also served as a regional qualifier for the Olympics - in a friendly match in 2004. Korea has never played against Gabon, who qualified for the Olympics as the No. 1 team in Africa.

While fans are hoping for the country’s first medal in football, Hong said he will not look that far ahead, at least for now. Korea’s best finish came in 2004 when it reached the quarterfinals.

“What’s important now is advancing from the group stage,” Hong said. “We don’t know what will happen after reaching the quarterfinals, but instead of thinking of the medal, we should first focus on the group stage.”

With this in mind, the Korea Football Association and Hong will prepare thoroughly for the Summer Games. The 43-year-old coach, who was attending the group drawing event with assistant coaches Kim Tae-young and Ikeda Seigo, will return to Korea tomorrow after looking at football stadiums in Newcastle, Coventry and London where the team will be playing in three months.

“What we need to do right away is to analyze all three teams,” Hong said. “We have now officially hit the road to the Olympics.”

Hong said when he returns to Korea, he will start to think about forming the roster. It is expected that the coach will first announce a preliminary roster late next month that includes both K-League-based players and footballers in overseas leagues.

Then in early or mid-June, the team is expected to have a friendly against the team that resembles an opponent in Group B. June 1 to 12 has been selected as the international match week, but since the Korea senior football team will have a final-round qualifying match for the 2014 FIFA World Cup on June 8 and 12, the team will have to cooperate to avoid scheduling conflicts.

The final roster of the 18-man squad is expected to be announced in late June or early July, including three wild cards. Pundits have claimed that wild card selection will be critical for team’s performance.