Wyverns’ rotation gets healthy in time for Lions

Wyverns’ rotation gets healthy in time for Lions 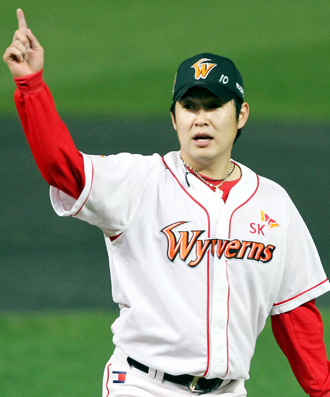 The two teams that met in the Korean Series will square off tonight for the first time this season, with SK Wyverns pitcher Song Eun-beom expected to make his 2012 debut at some point during the series after coming back from an elbow injury.

Tonight’s game is the first in a three-game series at Munhak Stadium in Incheon. The Wyverns will be looking to revenge the 4-1 Korean Series loss to the Samsung Lions, which spoiled their chance for repeat KBO titles.

The Wyverns’ rotation has been plagued with injuries, but good news came out recently that two injured starting pitchers will be back in the lineup.

With southpaw ace Kim Kwang-hyun still recovering from a shoulder injury and expected to return in late May, manager Lee Man-soo has called on Aquilino Lopez and Song Eun-beom to pitch in the first two games against the Lions.

Lopez, the Dominican right-hander who moved from the Kia Tigers to the Wyverns during the offseason, was pulled from the rotation on April 16 after shoulder pain. The player has one win and will start on the mound tonight.

However, the highly anticipated return of franchise pitcher Song should be the highlight of the monster series.

Song, who joined the Wyverns in 2003, has been a core pitcher for the Wyverns over the past few years. Despite suffering from pain caused by bone fragments in his right elbow, the right-hander marked eight wins and eight losses with a 3.43 ERA last season.

During the post season, the 28-year-old’s heroics led to two wins with a 1.06 ERA after taking painkiller injections in the locker room.

But as the pain got worse, Song finally got surgery in December and removed the bone fragments. After four months of rehabilitation, the right-hander has finally joined the first team on Tuesday and will make his season debut tomorrow or Sunday.

Song has a solid record against the Lions. He had two wins, one save and one hold with a 0.73 ERA in six games against the Daegu-based ball club last year. The pitcher also didn’t allow a single run against the Lions in Game 3 of the Korean Series, which turned out to be his last game before surgery.

“I don’t think much about the opponent in my debut game,” Song said on Tuesday. “What’s important is how I deliver my game.”

Song said it was fortunate that his rehabilitation went well and he was able to come back two or three weeks earlier than expected. However, the Incheon-born player admitted that his form isn’t 100 percent, although he feels no pain in his right elbow.

“The problem is, my fastball speed isn’t like my past days,” Song said. “All my pitches seem to be a bit out of touch as well.”