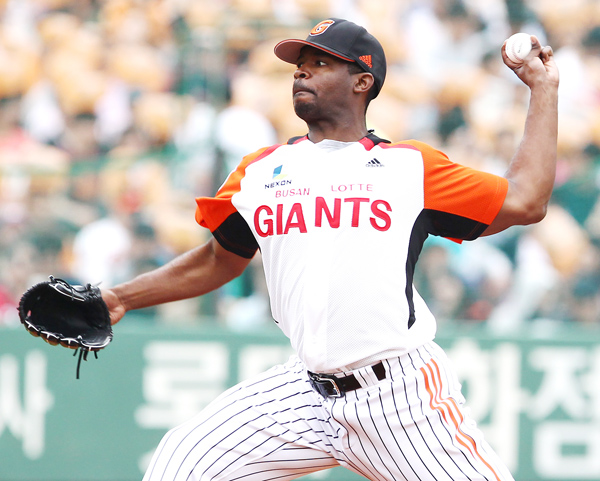 Lotte Giants pitcher Shane Youman pitches during the KBO game against the LG Twins at Sajik Stadium in Busan on Sunday. Youman had an one-hit shutout and collected his third win of the season. By Kim Min-gyu


This Korea Baseball Organization season, the Lotte Giants were tasked with filling the void of two players - slugger Lee Dae-ho, who went to the Orix Buffaloes in Japan, and lefty starting pitcher Jang won-jun, who is now serving his military duty at the National Police Agency.

While the batting trio of Jeon Jun-woo, Hong Sung-heon and Park Jong-yoon successfully led the team’s attack and filled the void left by Lee, in Jang’s absence, Shane Youman has stepped up to surprise fans last month.

In four games in April, Youman collected three wins without a loss and a 1.53 ERA. During 29 1/3 innings, the Giants starter didn’t allow a single home run and marked a 0.171 opponent batting average, as well as his 0.75 WHIP (walks plus hits divided by innings pitched), which is the best in the league.

The highlight of his performance came on Sunday against the LG Twins. In front of home fans that packed the Sajik Stadium in Busan, the 33-year-old southpaw delivered a nearly perfect game. He blanked the Twins batters for a full nine innings in only 103 pitches, after giving up one hit and no bases-on-balls.

Youman’s one-hit shutout happened in the KBO for the first time since Jeong Min-chul, current pitching coach for the Hanwha Eagles, threw a one-hit shutout for the Haitai Tigers in 1994. In fact, the Louisiana-born American became the first foreign pitcher to do it.

Before the season kicked off, Youman didn’t receive much attention from fans. In fact, he had a mediocre performance in Major League Baseball, going 3-7 with a 5.13 ERA while playing 21 games for the Pittsburgh Pirates. Youman later played in independent leagues and featured in the Taiwan league before coming to Korea.

With an average preseason performance, he was shadowed by teammate Ryan Sadowski, who had already collected 21 wins in his last two KBO seasons.

However, it turns out that Youman is performing better than expected and now some fans are saying that the Giants have hit the jackpot for this season.

Pundits say that Youman has an interesting pitching form which throws off opposing batters’ timing. The 195-centimeter-tall (6-foot, 3-inch) pitcher also has a good circle changeup, a pitch that looks like a fastball but drops near home plate.

“I’m starting to get comfortable here in Korea learning about what hitters can do and can’t do,” Youman said on Sunday. “I just want to stay focused throughout the rest of the season.