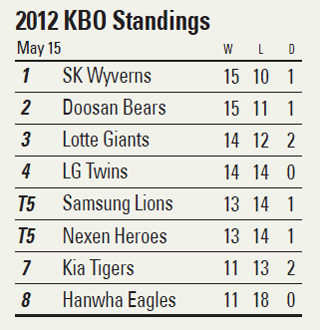 On Friday against the Doosan Bears, with only five outs left to close the game, Yoon surrendered a single to Son Si-hun and blew his chance at becoming only the 12th pitcher to achieve a no-hitter in KBO history. The last no-hitter in the KBO was on May 18, 2000, by Song Jin-woo in a game against the Haitai Tigers, now the Kia Tigers.

However, despite Yoon’s efforts, the Tigers are still struggling to climb up in the league standings. The 2009 KBO champions went 3-3 in last week’s six games, but are also currently the league’s worst team in batting and second-worst in ERA.

The Gwangju-based team will have another tough time this week. It begins tonight with a three-game series against the defending champion Lions who collected four wins, one draw and one loss last week, the best record among KBO clubs. The Tigers will then travel to Busan to face the Giants.

Another team to have a tough schedule will be the LG Twins, which will face the league’s top two teams this week.

The Seoul-based team will start at Munhak Stadium in Incheon tonight against the SK Wyverns, which has the best team ERA at 3.36, and then square off against its arch rival, the Bears, with which it shares Jamsil Stadium. The Bears are currently in second place behind the leader Wyverns.

Both the Wyverns and the Bears are on two-game winning streaks.