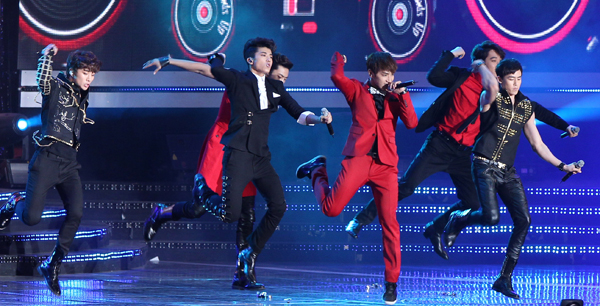 
Idol group 2PM successfully wrapped up its “Six Beautiful Days” concert at the Budokan in Tokyo.

2PM performed May 24 and 25, and then from Monday to Thursday night. It was the first time a Hallyu band had performed at the Budokan for six consecutive shows.

At a press conference Wednesday, Taecyeon said the group was thrilled about the shows and the venue.

“When we were trainees, Rain used to perform at the Budokan and we were so envious. Now, to think that we are standing where superstar Rain has performed before, it’s just amazing,” he said.

The fans at the concert sent a special round of applause for Taecyeon, who took the stage despite having undergone surgery just a week ago to repair a broken arm.

The six shows featured a different member each night and showcased solo acts. In addition, the boy band wooed the Japanese with a variety of acts, from acrobatics to laser light shows, and a medley of hit songs from “Hands Up” to “10 out of 10.”