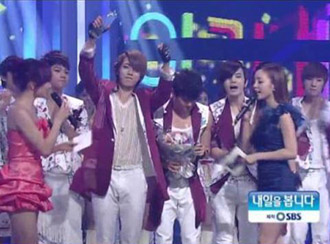 KARA’s Goo Hara has apologized to fans of boy band Infinite following the backlash that resulted from Infinite’s time on SBS’ “Popular Songs” being cut short.

Goo used her Twitter on June 3 to say, “Crazy day today. To Infinite fans, I’m sorry but there wasn’t much time left. Sorry again and congrats to Infinite for being No. 1.”
The post came after she hosted the SBS K-pop chart show the night before where she had to interrupt the boy band during their acceptance speech after coming first on the week’s chart.

After the broadcast, fans of the boy band were protesting online about the abrupt ending and the network’s decision to not air the band’s encore performance.

Fans of idol groups often express their displeasure when their favorite band is denied extra time on TV.
Just last week when boy band Beast’s performance at the “2012 I Love You Korea Dream Concert” was edited out, fans petitioned online to receive an official apology from the TV network.
By Carla Sunwoo [carlasunwoo@joongang.co.kr]