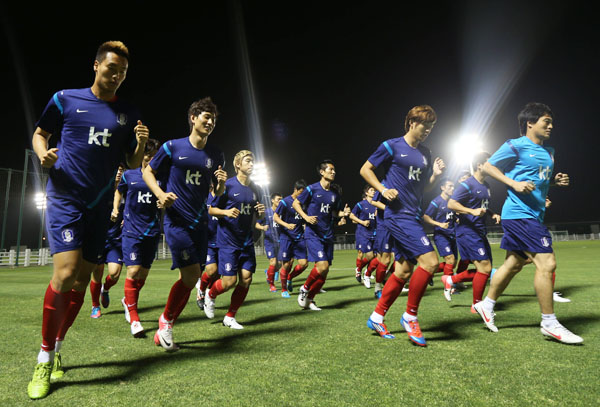 
The final stretch of Korea’s bid to qualify for the 2014 FIFA World Cup begins early tomorrow morning (1:15 a.m., KST) when the Taegeuk Warriors face Qatar at Al-Sadd Stadium in Doha.

Korea, ranked No. 35 in the world, has a slight edge in its head-to-head record against Qatar with two wins, two draws and one loss. But the Qatari heat and a recent 1-0 victory over Lebanon in an earlier World Cup qualifier give the No. 96-ranked home side reason for optimism.

After playing a friendly against world No. 1 Spain on May 31 in Switzerland, Korea landed in Qatar on Monday and has been training in the heat since. Even at night the temperature in Doha stays around 35 degrees Celsius (95 degrees Fahrenheit).

National team defender Cho Yong-hyung, who is playing for Qatari club Al Rayyan, knows how to handle the extreme heat better than any other player on the squad and warned his teammates that the weather could be an influential factor.

“I can’t even describe how hot this place is,” Cho said to Ilgan Sports, the JoongAng Ilbo’s sports daily yesterday. “When the humidity level gets high, you can’t even breathe comfortably.”

There is an air conditioner system installed in Al-Sadd Stadium to cool the temperature down, but Cho was skeptical as to whether the hosts would do a favor for their visitors.

“For Qatar, hot weather is to their advantage,” Cho said. “Our players should be prepared for the worst conditions as if that air conditioner would be off for the entire match.”

In addition to the heat factor, Korea must be prepared to take on Qatar’s naturalized citizens on the pitch. In their first match against Lebanon, six of the 11 starting members were born outside of Qatar. They are from Brazil, Ghana, Senegal, Kuwait, Iraq and Saudi Arabia.

Among them is Uruguay-born striker Sebastian Soria Quintana, who will be the Qatari side’s top threat to the Korean back line.

The 28-year-old, who became a Qatari citizen in 2006, has scored 23 goals in 58 matches. He was a pivotal player for Qatar’s gold medal run in the 2006 Asian Games. Quintana’s strike set them on course for World Cup qualifying when he scored versus Lebanon in their last match.

Brazilian-born veteran midfielder Fabio Cesar Montezine, who has previously played with Italian Serie-A clubs Udinese and Napoli, is also ready to play after coming off of a suspension. 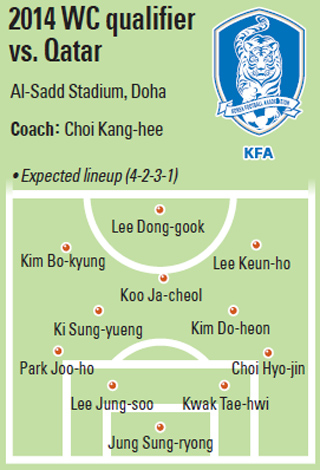 Coach Choi Kang-hee tested his attacking lineup with overseas-based players in the friendly against Spain last week. For this match, K-League stars Lee Dong-gook of Jeonbuk Hyundai Motors and Lee Keun-ho of Ulsan Hyundai FC will lead the team’s attack. Both have played well against Middle Eastern teams in the past.