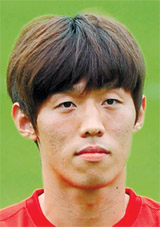 “We’re still putting finishing touches on the deal, but the transfer fee will be around 2.8 million to 3 million euros [$3.4 million to $3.7 million], with an annual salary of 1.2 million pounds [$1.9 million],” Lee said. “We’re expecting a three-year deal, but Cardiff City wants four years. So we still need to work on some details.”

Lee explained that the financial terms are on par with those of a starting player in a middling club in the first-division Premier League, and that is what Kim had demanded. Cardiff City will also allow Kim to report to the Korean national team’s training camps during the season, Lee added.

Earlier in the day, a Japanese newspaper, quoting a Cerezo Osaka official, reported Kim was about to sign a multi-year deal with Cardiff City for $1.2 million pounds per season.

Kim is currently training with the Korean Olympic team ahead of the London Games. He has also been a fixture on the senior national team in recent international contests.

Lee said he will ask the Olympic team to allow Kim to undergo a physical with Cardiff City before the start of the Olympics so the deal can be signed immediately. Korea’s first Olympic match falls on July 26 against Mexico.

Kim is a left-footed midfielder with an improving offensive touch. He scored twice for Korea in a World Cup qualifier against Lebanon last month, and Park Ji-sung, the Korean Premier League star, anointed Kim as his heir apparent when Park retired from international play last year.

Lee said some German and Scottish clubs showed interest in his client, but Kim was willing to stay patient and start his European career in a lower division.

In a recent media interview, Kim said, “I think I am a pretty good player in Asia, but I haven’t proven myself in Europe. I want to take it step by step, starting in a lower tier.”

Cardiff City ranked sixth among 24 teams in the Football League Championship. The top three teams from there earn promotion to the Premier League each season.