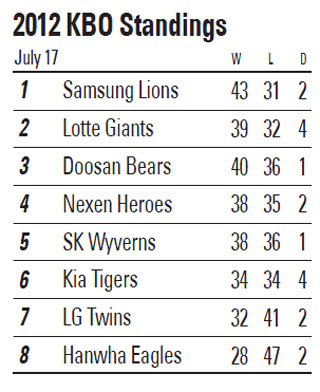 As the pace of competition slows in preparation for the annual All-Star Game, there is good news and bad news for the SK Wyverns and LG Twins.

The bad news is that the Wyverns, who ended an eight-game losing streak last week, and the Twins, who have dropped seven straight, have to play three more games before the break.

The good news is they will play each other, guaranteeing that one of them will end the first half of the season on a winning note.

In the 31-year history of the KBO, only one team - the Samsung Lions in 2010 - made it to the Korean Series after having a 10-game losing streak during the regular season.

Their losing streak caused the Wyverns to fall from second place to sixth, an unfamiliar position for a team that advanced to the past five Korean Series and won three of them.

The Twins are stuck in seventh, losing since a July 3 game against the Lions.

The Lions, who cemented their first place position with a four-game winning streak, take on the last-place Hanwha Eagles. Lee Seung-yeop, a former Yomiuri Giants slugger who returned for the Daegu-based franchise this year, is one homer away from 500 for his career in Korea and Japan.

The second-place Lotte Giants have already met their goal of being at least three games over .500 at the midseason break, with seven more wins than losses. The Busan-based team faces the Nexen Heroes for three games starting tonight in Seoul.

In Gwangju, Kim Sun-woo of the Doosan Bears and Seo Jae-weong of the Kia Tigers, two former Major League pitchers, face off in the series opener.

The All-Star Game will be played Saturday in Daejeon, after the players association withdrew its boycott threat when progress was made in talks over adding a 10th team.

As part of the festivities, the first Korea-Japan Legends game will be held Friday at Jamsil Stadium in Seoul.