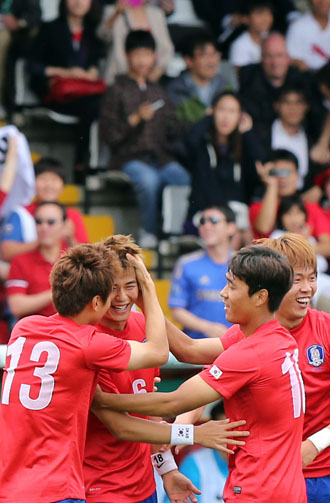 Ki Sung-yueng of Celtic, second from left, is celebrated by his teammates including Park Chu-young of Arsenal, right, after he scored the first goal in Korea’s 3-0 victory over Senegal in Korea’s final tuneup match in Stevenage, Hertfordshire, on Friday. [YONHAP]

The Taegeuk Warriors will look to topple traditional football powerhouses at the London Olympics in a fashion similar to the 2002 FIFA World Cup. But for midfielder Ki Sung-yueng, the Games will mean much more than representing the country.

The 23-year-old Celtic footballer tallied one goal and one assist in Korea’s 3-0 victory over Senegal on Friday in their final tuneup match before their Group B competition versus Mexico on Thursday. If Ki keeps up his quality performances when it counts, his offseason prospects in the English Premier could be directly affected.

The Daily Mirror tabloid newspaper reported Saturday that English Premier League club QPR, which recently brought in Park Ji-sung from Manchester United, was offering 6 million pounds ($9.4 million) in a “desperate” move to land Ki from the Scottish Premier League side. The talks between QPR and Celtic are “set to conclude soon,” the British tabloid reported.

A JoongAng Ilbo exclusive also cited a source involved in the process who said the transfer was “nearly complete.”

Other English Premier League sides are also said to be in the hunt for Ki, including Liverpool.

“Owner [of QPR] Tony Fernandes is keen to land top Asian talent and has given boss Mark Hughes the cash to land classy Ki for his club to team him up with Park Ji-Sung,” The Daily Mirror said. “Celtic have been approached and are fighting to get the best deal possible - with Ki possibly being sold despite their pending Champions League campaign.”

Fernandes recently admitted that he is looking at signing another Korean player, but has yet to receive the approval from the club the player belongs to.

In an interview with AFP after the match against Senegal on Friday, Ki also expressed his desire to play in England.

“Definitely, if the Rangers drop out of the Scottish Premier League, the league will drop down as well,” Ki told AFP, referring to Celtic’s longtime rival who dropped to the Scottish League’s third division after a financial meltdown.

While saying his focus for the moment is on the Olympic campaign, Ki said playing with an English team would improve his football.

In the tuneup match against Senegal held at Lamex Stadium in Stevenage, Hertfordshire, on Friday, Ki opened Korea’s carnage in the third minute, connecting a pass from Yun Suk-yong into a midrange shot. Three minutes later, he assisted on a free kick for Park Chu-young of Arsenal who found the back of the net near the left side of the goal post. Koo Ja-cheol of FS Augsburg in Germany’s Bundesliga added a goal in the 31st minute.

Losing several key defensive players to injury, the Hong squad was assessed to have weakness on the back line, but “as they kept Senegal from scoring, the teamwork in the defense has improved,” Hong told reporters after the match. Hong, however, said that Korea’s second-half play at the match was worrisome and he will think of adjustments before facing Mexico.