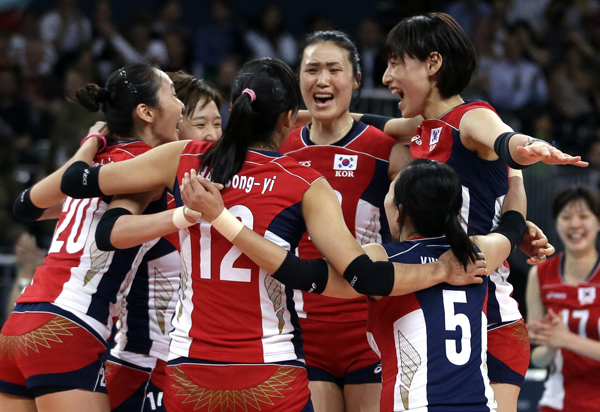 
Team Korea added its 12th gold medal on Day 12 of the London Olympics as Kim Hyeon-woo beat Tamas Lorincz of Hungary in the final match of the men’s 66-kilogram Greco-Roman wrestling.

Now the nation is looking to break its overall gold-medal record. The country’s best performance came four years ago during the Beijing Olympics, when Team Korea won 13 gold medals.

In team sports, men’s football lost to Brazil 3-0, but the women’s volleyball and handball teams delivered victories to lighten up the mood.

The victory not only snapped Korea’s nine-game losing streak against Italy, but it also gave Korea its first shot at a medal in the sport since the 1976 Montreal Olympics. The Korea women’s volleyball team won the bronze medal 36 years ago. The team is scheduled to face world No. 1 the United States tonight at 11 p.m. KST.

It was also a satisfying day for the women’s handball team as it also advanced to the final four. The team narrowly edged Russia 24-23 to make its eighth straight Olympic semifinals appearance. With about two minutes left until the final whistle, Korea kept a two-point lead after goalkeeper Ju Hui denied Nadezda Muravyeva’s seven-meter penalty shot. The Russians came back with a goal by Irina Bliznova’s and had a final chance to attack, but time ran out as the Korean women blocked the last shot from Victoria Zhilinskayte.

Korea will now take on Norway in the semifinals that is scheduled for 1 a.m. on Friday KST. In the group stage, the two teams played to a 27-27 draw.

This will be also a rematch of the semifinals at the 2008 Beijing Olympics. The Scandinavian nation beat Korea 29-28 and went on to take the gold medal.

While these teams smiled at the end of the day, it was a bitter outing for the women’s table tennis team as it lost to Singapore in the bronze medal contest. Kim Kyung-ah, Seok Ha-jung and Dang Ye-seo were blanked by the Singaporean trio of Feng Tianwei, Li Jiawei and Wang Yuegu 3-0 in a round that included two singles matches and one doubles match.

This is the first time that the Korea women’s table tennis team has failed to win a medal since the sport became a medal event at the 1988 Seoul Olympics.

The men’s field hockey team lost to the Netherlands 4-2 and failed to advance to the semifinals. The team finished its Group B campaign with two wins and three losses. Only two teams in the group can advance to the next round.