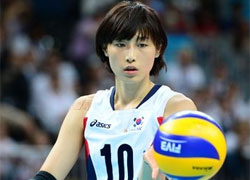 LONDON - Kim Yeon-koung of Korea capped her first Olympics with 207 points scored - more than any other woman since the 2004 Summer Games - after Korea finished fourth at the London Olympics.

Kim scored a team-high 22 points in the 25-22, 26-24, 25-21 bronze-medal match defeat to Japan on Saturday at Earls Court. Her points total was three points better than the 204 points scored by Ekaterina Gamova of Russia at the 2004 Athens Games.

Logan Tom of the United States led scoring in Beijing four years ago with 124 points.

“It’s really great, this gives me a lot of pride and confidence for my career,” said the 24-year-old Kim, who scored 186 points from spikes, 14 from blocks and seven from serves in eight matches.

Kim’s Olympics breakout certainly established Korea as a team to watch come Rio de Janeiro in four years as she helped guide the Asian nation back to the Games for the first time since Athens.

“I believe that throughout this tournament the level of Korean volleyball has gone to the next level,” Kim, playing in her first Olympics, said through an interpreter. “There are some areas that we did well and other areas we didn’t do very well but in those areas where we struggled we will try to improve ourselves for next time and areas we did well we will try to build on.”

Korea’s performances - they beat Brazil, Serbia and Italy - were encouraging considering the team finished 13th at the 2010 World Championship and 14th at this year’s World Grand Prix.