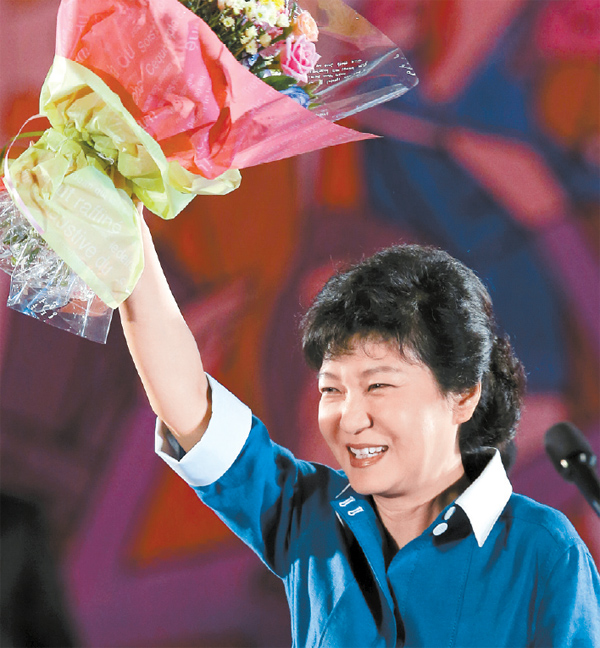 Park Geun-hye reacts to supporters yesterday after she was nominated as the presidential candidate of the ruling Saenuri Party at a convention held at Kintex in Ilsan, Gyeonggi. [YONHAP]

The Saenuri Party yesterday held a convention in Ilsan, Gyeonggi, and announced the outcome of the primary. Park won 86,589 votes or 84 percent, while Gyeonggi Gov. Kim Moon-soo finished the race in a distant second with 8,955 votes (8.7 percent).

After the announcement of Park’s victory, firecrackers were set off and a 10,000-strong audience at the convention center chanted her name.

While Park’s family background has helped her cement a commanding presence on the Korean political stage, presenting a vision that goes beyond her father’s legacy of economic development is seen as her main challenge. In her acceptance speech, Park laid out her vision for the Dec. 19 presidential election, promising a country that puts every individual’s happiness before the government or national achievement.

“I will walk the path to the grand unity of the nation by moving beyond ideology and class, regions and generations, and industrialization and democratization,” Park said in her acceptance speech.

Park also expressed regret over a recent money-for-nomination scandal that rocked the ruling party and promised punishments for the guilty and reform of the party.

“As the presidential candidate, my first promise will be establishing a special organ inside the party for political reform,” Park said. “In-house and outside experts will join it to reform the nomination system and create a bold overhaul for political advancement, and I will make sure it will be implemented.”

She also promised to root out corruption and abuse of power. “I discipline myself and my associates severely,” Park said, promising to introduce special inspections and an independent counsel system to prevent corruption scandals involving her family and aides. “I will not tolerate anyone involved in corruption,” Park said. “I will have no hesitation to punish them.”

She said a new era should open for Korea to go beyond the paradigms of industrialization and democratization. Putting the people’s happiness as the top priority of the government, she said, “I will build a country where every individual’s dream and hope will be realized.”

Calling “economic democratization,” one of her pre-campaign slogans, “the first step for the people’s happiness,” Park promised efforts to build an economy in which small enterprises and conglomerates grow together. She also promised to end discriminatory treatment of part-time or contract workers. A road map focused on economic democratization, welfare and employment will be created with experts from various sectors, she said.

In her acceptance speech, a glimpse of foreign policy was shown. “I will not tolerate any action that violates our sovereignty and that threatens our security,” she said. “I won’t be just satisfied with keeping peace. I will create a new framework for sustainable peace on the Korean Peninsula and cooperation in East Asia.”

In 2007, Park made her first bid for the presidency, but lost to Lee Myung-bak in the primary due to a narrow margin in a public opinion poll.

Park will visit the National Cemetery this morning for her first activity as presidential candidate to pay her respects to dead patriots. She is scheduled to attend a party Supreme Council meeting later in the day.

Her campaign will also try to expand her support base by recruiting fresh faces from outside. Park’s presidential campaign committee will invite experts from academia, the arts and the sports community when it formally launches after the Chuseok holiday next month. “We will create a campaign timetable for her to win more centrist voters in the capital region in the ages between 20 and 40,” said the Saenuri Party’s secretary general, Suh Byung-soo.

Park will also need to convince the public that she will end the Gyeongsang dominance of the government and politics. Except for the five years under the Kim Dae-jung presidency, modern Korean politics have been dominated by politicians from the Gyeongsang region, and Park’s stronghold is also in the region.

“The Blue House congratulates Park for being elected the Saenuri Party’s presidential candidate,” said Park Jeong-ha, presidential spokesman. “We expect her to have an election that will give hope to the people by presenting policies and a vision.”

The main opposition Democratic United Party shrugged off Park’s landslide, calling it “an abnormal outcome to come from a normal political party in a democratic country.” It vowed to scrutinize her more vigorously as the formal presidential candidate.

No comment was made by independent Ahn Cheol-soo or his aides yesterday.