Hilton to be in Kim Jang-hoon video

Hilton to be in Kim Jang-hoon video 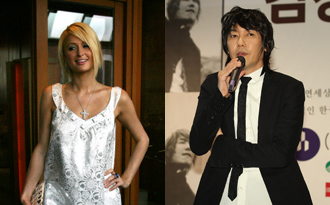 In an unlikely choice of subject, singer and activist Kim Jang-hoon has recruited heiress Paris Hilton for his new music video.

For the title track of his 10th album to be released in October, Kim contemplated options including Jessica Alba and Scarlett Johansson. In the end, Hilton was chosen because she has a significant following in Korea.

“Hilton was aware that Kim has a solid reputation in Korea and thus she said yes,” said a spokesperson from Kim’s agency.

The music video will go into production from today and continue to Saturday in Los Angeles.

The CBD area of LA and the shores of Malibu will be the backdrop to the clip.

“There will be 2-D and 3-D versions of the video,” said Kim’s agency.” We are spending about 1.5 billion won [$1.3 million] on the production and it’s going to be unparalleled in Korean music videos.”

Some of the best and finest of the American film industry is set to take part in the project according to Zion Live, which looks after Kim’s promotions abroad.