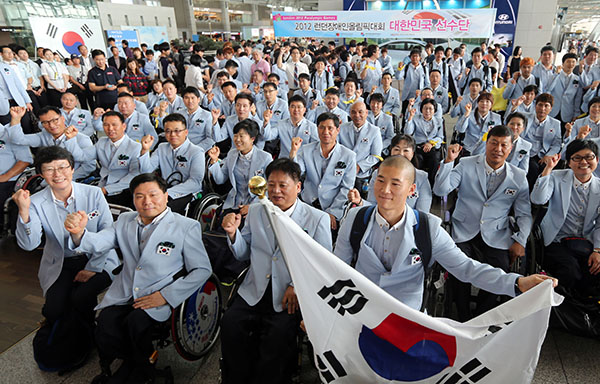 Korea’s main athletic delegation for the upcoming Paralympics in London attend a send-off ceremony at Incheon International Airport before they fly to the host city yesterday. [YONHAP]

Korea’s main athletic delegation for the upcoming Paralympics in London departed for the host city yesterday, ready to top their gold medal counts from the previous Paralympics four years ago.

The country grabbed 10 gold medals at the 2008 Beijing Paralympics.

“Our athletes are so determined that they’re like beasts chasing their prey,” said Jang Choon-bae, the chief delegate. “The goal is to win 11 gold, but I expect better performances. Our strengths are table tennis, archery, shooting and swimming, and we can also win titles in other sports.”

Min Byeong-eon, who won silver in men’s 50-meter backstroke in S3 classification in Beijing, said he is eager to do one better this time.

“When I first began training for London, I didn’t know this day would ever come, but now it’s finally hit me,” he said. “I’ve prepared hard. I will try to relax and get the gold medal.”