Korea’s best falls in the first round

Korea’s best falls in the first round 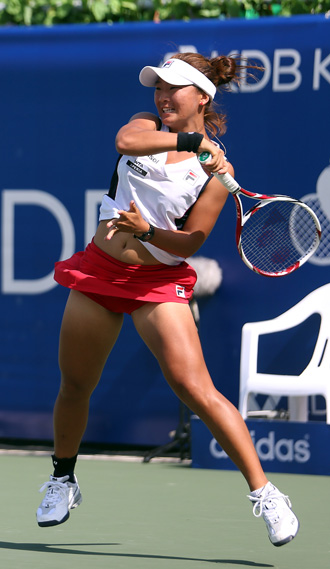 Despite a home turf advantage, Korea’s top-ranked tennis player Han Sung-hee failed to advance past the first round of the KDB Korea Open yesterday, falling to Kaia Kanepi of Estonia.

The KDB Korea Open, the biggest annual international tennis tournament in the country, has attracted 24 players ranked in the top 100 in the world. No Korean players have advanced to the second round of the event since it began in 2004, initially under the banner of the Hansol Korea Open.

Three Korean players, including Han, entered the first round of this year’s tournament as wild cards. At stake in this year’s competition is a total of $500,000 in prize money.

One of the other two Korean players, Hong Hyun-hui is ranked 662nd, and also lost in the first round to Galina Voskoboeva of Kazakhstan. Voskoboeva, who finished second last year and is ranked 68th. She won in straight sets, 6-1, 6-2. ‘

Lee So-ra, ranked 468th, is Korea’s last hope, but will face an uphill battle in the remaining first round match today against second-seed Maria Kirilenko of Russia, ranked 14th in the world.

Top seed Caroline Wozniacki of Denmark, ranked 11th, cruised into the second round with a 6-1, 6-2 victory against Arantxa Rus of the Netherlands, ranked 73rd.

One of the few surprises yesterday came from fifth seed and 20th ranked Julia Goerges of Germany, who was beaten by 78th ranked Silvia Soler-Espinosa of Spain, 6-1, 6-7, 2-6.

Jamie Hampton of the United States, ranked 100th, who has been in the media spotlight because her mother is Korean, advanced to the second round by getting past 65th ranked Romina Oprandi of Swtzerland, 5-7, 6-3, 6-2.

Apart from the three Koreans, four lower-ranked players made to the 32-player tournament through preliminaries and one of them, Caroline Garcia of France, ranked 182nd, beat Alexandra Cadantu of Romania, ranked 84th, 6-2, 6-3.

In a doubles match, Korean pair Choi Ji-hee and Jun Nam-yeon, who entered as wild cards, lost to Tamira Paszek of Austria and Klara Zakopalova of Czech Republic, 4-6, 2-6.