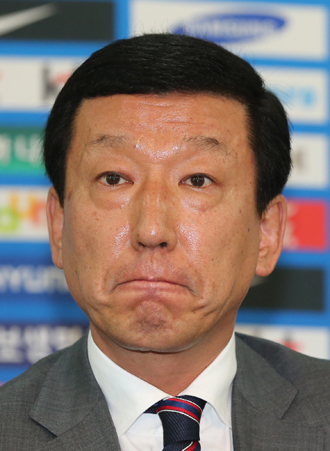 Veteran striker Lee Dong-gook was left off the national football team for the first time under the leadership of Choi Kang-hee as the national coach opted for young guns in what some see as the beginning of a full-fledged generational shift in his World Cup squad.

Choi announced yesterday his 23-man roster for the Asian 2014 FIFA World Cup qualifier against Iran in Teheran on Oct. 11, a match that is crucial for Korea’s bid to clinch its eighth consecutive pass to the quadrennial event.

In the ongoing final qualification group stage, Korea is leading the five-country Group A with two victories and one draw, but runner-up Iran is only three points behind.

Lee, a 33-year-old Jeonbuk Motors forward, is absent from the latest roster after playing in all seven previous matches with the national squad since Choi, the Motors coach, took the helm of the national team in February.

Instead, Son Heung-min, a 20-year-old forward for Bundesliga side Hamburg SV, was called up for the national team.

Lee, who has scored 29 goals in 93 A-matches since first joining the national team in 1998, made a stellar comeback to the national squad in February, scoring two goals in a friendly against Uzbekistan. He added one in Korea’s next match against Kuwait in the same month, which was Korea’s critical final match of the third preliminary round.

But his pace slowed down, failing to score in Korea’s first two matches in the ongoing fourth preliminary round against Qatar and Lebanon, both in June, as well as two tune-up matches against Spain in May and Zambia in August.

He added one goal in the third match against Uzbekistan last month, but couldn’t keep the team from being held to a 2-2 draw after displaying poor chemistry with younger star players such as former Arsenal striker Park.

“Since the summer, Lee Dong-gook has shown physical problems in the K-League and after the Uzbekistan match. I thought there needed to be a change for the team,” Choi told a media conference held at the Korean Football Association headquarters in Seoul yesterday.

Lee is the most successful active player in the domestic league, continuously extending his K-League career goal record. Lee has scored 130 goals in the league so far.

But, in part due to his age, Lee has struggled recently and has scored only three goals in the previous 12 league matches, raising cautious speculations about a possible retirement. He will turn 35 before the Rio de Janeiro World Cup begins.

“I watched the players playing in Europe and have thought that we could revamp an offensive line in an away match against Iran,” Choi said.

Choi did not give a clear answer to whether Lee’s exclusion is a signal of a switch to a younger generation of players, saying the biggest priority at hand is getting a berth to the World Cup. But he did say that the outline of the current roster will be maintained.

“Even if they are veteran players, they can’t play their role without remaining strong enough play to draw recognition from their juniors,” Choi said.

Son returned to the national team after a three-match absence. He scored two goals against Borussia Dortmund last Saturday, leading his club to a 3-2 win over the defending champions.

The goals, along with another of his strikes on Sept. 16, led ESPN Star Sports to pick him as one of the “Best 11” in the Bundesliga. “He has many strengths such as shooting and dribbling, but he was weak at team play and failed to be a steady pick for the Olympic teams,” Choi said. “I thought we could use his strength for the national team.”