Familiar foes set to square off in Korean Series

Familiar foes set to square off in Korean Series 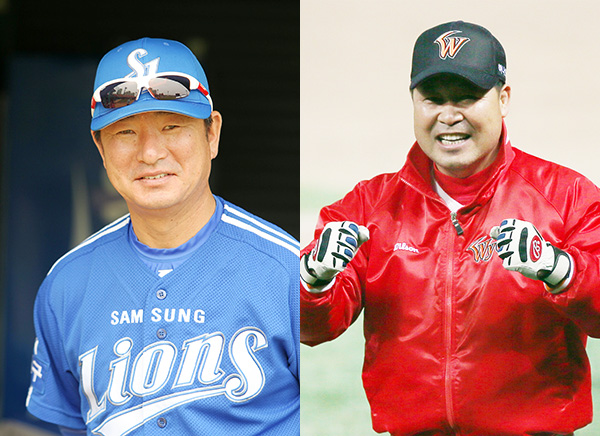 
The regular-season runner-up SK Wyverns will meet the Samsung Lions in the Korean Series for the third straight year, and if the two previous Korean Series are any indication, winning a title will be an uphill battle for the challengers.

Coming off a 6-3 Game 5 victory Monday night over the Lotte Giants, the Wyverns will open the best-of-seven series tonight. The first two games will be on the Lions’ home turf in Daegu, while the third and fourth games will be in Incheon on Saturday and Sunday. If necessary, the remaining three games will be Tuesday through Thursday at Jamsil Stadium, Seoul.

The Wyverns will be trying to reclaim the title the 2010 pennant winners won by sweeping the Lions, who needed five games - two of them extra innings - to eliminate the Doosan Bears.

Last year, the tables were turned when the season champion Lions routed the worn-out Wyverns, 4-1, after SK played five games to get past the Giants and into the Korean Series.

Of the 10 times in league history that the semifinals have gone the full five games, only twice did the winners prevail in the Series.

History aside, the Lions are strong favorites to win their seventh title.

While the Lions posted a league-best earned run average of 3.39, the Wyverns were fourth at 3.82.

Yoon Sung-hwan and Jang will start for the Lions tonight and tomorrow, respectively, while the Wyverns will counter with Yoon Hee-sang and Santiago, the teams said yesterday.

Nonetheless, the Wyverns won 10 of 19 regular-season games with the Lions.

Lions manager Ryu Joong-il, however, is unfazed by the regular-season record, saying he plans to use different pitching and game tactics for the Korean Series.

Ryu said his players will do well if they overcome their biggest potential pitfall: themselves.

“I asked the players to have confidence, but not be complacent, and to give their best every game,” Ryu said.

Wyverns manager Lee Man-soo, like Ryu a former star slugger for the Lions, said he expects to “surprise” his former franchise.

“We lost to Samsung at last year’s Korean Series and we are resolved about this year’s event,” Lee said.

It is the first Korean Series berth for Lee as the official SK manager, who was acting manager for the club last year after SK sacked Kim Sung-keun in the middle of the 2011 season.

Early in the season this year, Lee faced criticism from the fans and the team officials who wanted a similar formula for success from him to that of his predecessor.

Kim, known for imposing rigorous training and discipline on his players, led the team to the Korean Series four straight times and won three of them in 2007, 2008 and 2010.

Lee refused to copy Kim’s style and took a more friendly approach toward the players, as he showed in Monday’s final playoff game against the Giants. He wanted his players to relax, so he sent them letters prior to the game saying they were allowed to blow it, but “in a feel-good way.”

That pep talk might have helped the Wyverns overcome a 0-3 deficit in the bottom of the second inning to tie the game in the fourth, take the lead with two more runs in the fifth and then seal the victory with an insurance run in the seventh.

Giants manager Yang Seung-ho, who was trying to lead his team to the Korean Series for the first time in 13 years, said the loss, bitter as it was, has “laid the groundwork for going a step further next year.”

For that to happen, the Busan club will have to shore up its bullpen and get better on defense. Two of six runs the Wyverns scored on Monday were the result of two critical errors by the Giants. “Even if we made the same number of mistakes as SK, we made critical ones, but SK made insignificant ones,” Yang said. “It is something that we have to review a lot and I think we will be able to be a truly strong team when we correct the situation.”