17-year-old qualifies but is too young for PGA Tour

17-year-old qualifies but is too young for PGA Tour 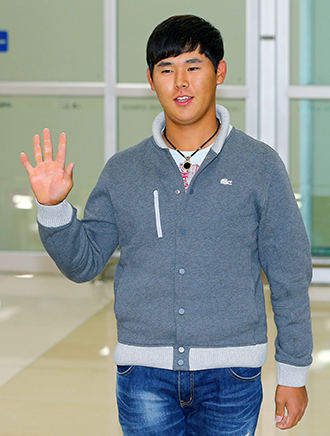 Kim Si-woo, who is too young to compete full-time on the PGA Tour next year despite earning a spot last week, said yesterday that he will try to increase the number of events he is eligible for through qualifying play on Mondays.

The 17-year-old Korean amateur national team golfer became the youngest to pass the PGA Q-School on Dec. 4, but due to an age limit clause of the PGA, he will be limited to up to three or four events until he turns 18 on June 28, 2013.

He can compete in more PGA events, however, if he wins Monday Qualifiers, the tournaments held prior to the start of the Tour competitions. The top four finishers of a qualifier can compete in the PGA event for which the qualifier is played.

“I knew about the age rule [before competing in the Q-School], but I thought it was important to set foot on the U.S. stage,” Kim told a press conference upon his arrival in Korea.

“My goal is to be able to compete in the Masters Tournament, but first I will do my best in the events where I can play.”

Kim will have a tough road to retaining the tour card, which is currently given to the top 125 money leaders on the Tour at the end of the season. Twenty-five others, who win the finals qualifiers among the ranked 126 to 200 on the money list, will also get the Tour card for the next season.

“I set my sights on finishing 125th on the money list next year,” he said. “I think I could get a good result if I work hard in the events that are available for me to play in.”

Kim tied for a 20th in the Q-School, breaking the youngest winner record held by American Ty Ryron, who passed the 2001 tournament at 17 years and six months. Kim was one month younger.