Kim Gu-ra a changed man off screen, not on

Kim Gu-ra a changed man off screen, not on 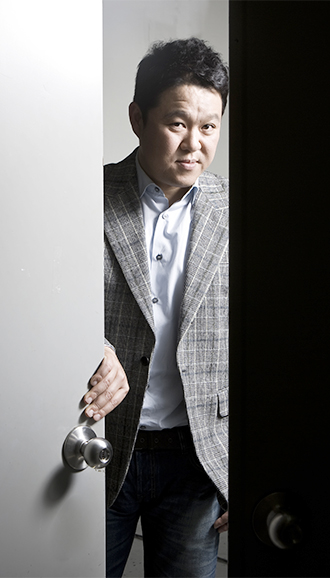 Kim Gu-ra came back to television in September after he announced a temporary retirement in April. His previous facetious comments about “comfort women,” comparing former sex slaves to prostitutes, stirred controversy. He says he wants to start again with a clean slate. By Kwon Hyuk-jae

Television show host Kim Gu-ra is blunt, straightforward and foul-mouthed with everyone from A-list actresses to up-and-coming idol singers. There’s no room for fluff when Kim’s running the program.

This approach has gotten him into trouble more than once. Before he began hosting major television shows, Kim fought for the spotlight for 12 years by hosting a podcast that ridiculed celebrities. And in order to grab attention, he’d say just about anything.

That includes some of the most sensitive topics in Korea today.

He toned down his malicious comments once he made it big time, but Kim knew he would pay for what he did in his past at some point during his career. That moment finally came in April.

Kim’s previous remarks made one decade ago regarding comfort women surfaced again on the Internet. He compared “comfort women” - a euphemistic reference to women who were forced into sexual slavery by the Japanese military during World War II - to prostitutes.

“To see prostitutes getting onto a chartered bus is a first since the comfort women,” he said during his podcast.

When his remarks went viral, Kim immediately stepped down in April. Five months later, he went back to work.

Kim is currently responsible for hosting two shows and he will soon be featured in a JTBC program next year. He says he has learned from the experience and fully regrets his actions.

“I was narrow-minded back when I was hosting the Internet podcast,” said Kim during a recent interview with the JoongAng Ilbo. “My motto was like, ‘I bite, therefore I am.’ I took pleasure in insulting fragile female celebrities.”

During his self-imposed hiatus, Kim visited a shelter every week for grandmothers who were once forced to live as sexual slaves.

“There were people who didn’t like my visits in the beginning,” Kim says. “But these women eventually accepted me, maybe because they’ve gone through a bigger ordeal in their lives.”

Kim still keeps in touch with the women. Since his home is located in Gimpo, Gyeonggi, and the shelter for the women is located near his house, Kim often assists them.

“Some may think I’m doing this for my public image, but this is the only way that I can pay for what I’ve done wrong.”

When asked what made him step down from his shows in an instant, he said, “It took me one or two minutes to make up my mind back then. Ever since I became famous, I was always insecure because of my previous comments.”

But it took Kim only five months to come back in September, and some have criticized his quick return.

“I had a lot of worries about my comeback. I thought it might be impossible to work in the broadcast industry again. I once thought about starting a business of my own.

“But some networks wanted to do shows with me again, and I gathered up my courage to do it as long as there were people who needed me.”

Kim says that viewers shouldn’t expect him to be any nicer than he was before. He says he will be the same on screen.

“I personally reflected on myself and my past wrongdoings, but I have to keep my identity as a tough TV host. People say I’m foul-mouthed, but I don’t think so. I ask questions other TV show hosts don’t just for courtesy’s sake.”

Starting next year, Kim has more projects planned. One is a variety show on JTBC - a televised version of “Consumer Reports.”

“People now want information-packed shows rather than gossipy ones. I hope I can show other sides by helping viewers make smart decisions.”