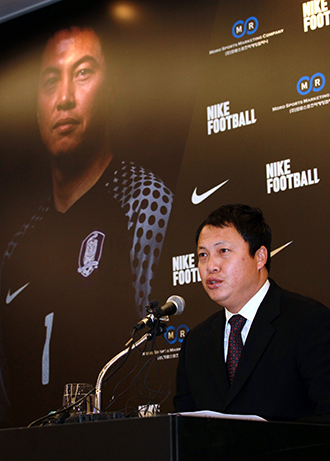 Lee Woon-jae said the 2002 World Cup was the most satisfying experience of his 15-year professional career at a retirement ceremony for the international goalkeeper in Seoul yesterday.

“I won’t forget the affection that the fans and my teammates showed me during the tournament.”

Since 1994, Lee played 132 international matches for Korea, giving up just 114 goals. Lee made appearances in four of the five last World Cups, playing for Korea as recently as the 2010 tournament in South Africa.

But it was the Korea-Japan World Cup when he shined the brightest. He saved several critical shots along the way to the semifinals, including a critical fourth shot in a penalty shootout against Spain in the quarterfinals.

Many of his teammates at the 2002 World Cup, including then-captain Hong Myung-bo, sent him congratulatory messages.

“I hope you will now focus on fostering the development of Korean football and play an important role,” Hong, who coached Korea to win the country’s first Olympic medal in the sport this summer, said in a video message broadcast during the ceremony.

Since turning professional with the Suwon Bluewings in 1996, Lee has started 410 games in the K-League and gave up 425 goals. Early last year, he left his old home, Suwon, to play for the Chunnam Dragons, where he also had an impressive run. He started 67 games for the Dragons, allowing as many goals over two seasons.

He said during the ceremony that he had thought of continuing his career as an athlete, but decided to leave while his skills are not rusty.