Special Olympics is personal for Na

Special Olympics is personal for Na 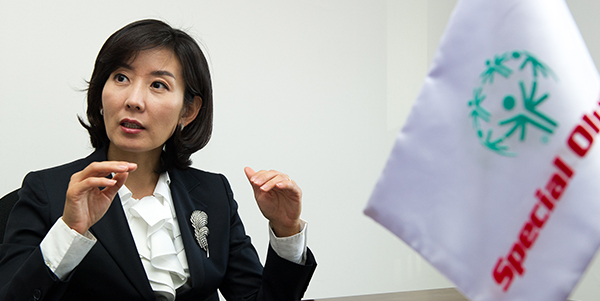 
The 2013 Pyeongchang Special Olympics World Winter Games, the biggest sports competition for those with intellectual disabilities, starts in Korea today.

Organizers have billed the event as a golden opportunity for Korea to raise its status among developed nations in terms of welfare and respect for those with disabilities. And the goal is personal for Na Kyung-won, chair of the organizing committee. She has a daughter with Down syndrome and is acutely aware of the challenges posed by Korean society to the disabled.

In a written interview with the Korea JoongAng Daily, Na said that hosting the sports event will make Korea a better and happier place to live by raising public awareness about the rights of those with intellectual disabilities and easing the prejudice they may face.

Pyeongchang earned the rights to host the Special Olympics in 2010, separate from the bid for the 2018 Winter Olympics and Paralympics.

Na said holding a significant winter sports event five years in advance will help prepare the city for the 2018 Games.


Here are excerpts from the interview:

Q. The event is to kick off an eight-day program on Jan. 29. Are you prepared?

A. I have immersed myself in the Special Olympics World Winter Games. To make sure that we’re able to host the event successfully, we have been checking to make sure that resources are distributed properly. We have also put in place measures to prevent athletes from going missing and developed plans on how to cope with that situation should it arise. We’re working on clearing snow from roads and developing customs clearance procedures for foreign delegates to help them attend more conveniently.

I recently visited facilities such as the Gangneung Indoor Ice Rink, where the figure skating and short track events will be held. Visitors from overseas said it looks as if we were better prepared than they expected.

We’re paying particular attention to the safety of our athletes. In the case of the floor hockey venue, we took safety into account from the design phase. We received positive feedback from the governing body of the Special Olympics, and officials asked if we could export our know-how on safety to the next Special Olympics.

What do you think is most special about the Pyeongchang Special Olympic World Winter Games?

The Global Development Summit is one of the most important events at the Special Olympics.

The Pyeongchang event will go down in history as Korea’s answer to improving human rights for the intellectually disabled, and for the first time in Special Olympic World Winter Games history, we will hold a truly global summit. World-class leaders such as Aung San Suu Kyi, Myanmar’s opposition leader, will participate in the summit and discuss about how to assist those with intellectual disabilities. We will draw international attention to the issue.

Korea finished fifth at the 2012 London Olympics in the gold medal standings and has grown into a front-runner in elite sports. But, some say this is not sufficient. Do you think the Pyeongchang Special Olympics World Winter Games will help transform sports in this country from an endeavor for the elite to one open for all?

The Pyeongchang Special Olympics World Winter Games will pique public interest in those with intellectual disabilities and serve as a chance for the country to take its sports programs for the disabled to the next level.

It may be too much to predict a shift in focus from elite sports overnight, but at least we can expect this event to bring rapid change in the perception of sports for athletes with intellectual disabilities.

The legal framework in Korea regarding those with disabilities, including the social welfare system, should be expanded as well. I am sure that our society is heading in that direction.

Pyeongchang will hold the Olympics and Paralympics in 2018. Do you consider the Special Olympics World Winter Games to be a kind of dress rehearsal for the 2018 Games?

Residents and officials in Gangwon think of the Special Olympic World Winter Games as a “pre-event” for the 2018 Pyeongchang Winter Olympics. The expertise we have developed to host the 2013 Special Olympics can certainly be applied in 2018. In particular, we are looking forward to helping with preparations for the 2018 Winter Paralympic Games.

Kim Jin-sun, chairman of the organizing committee for the 2018 Pyeongchang Winter Olympics, and I speak frequently.

Jacques Rogge, IOC president, will visit Korea during the Special Olympic World Winter Games, and that, as far as I know, was thanks to cooperation from the Pyeongchang Winter Olympics Organizing Committee.

This is the first Special Olympic World Games to be hosted by Korea. How do you compare this with the 1988 Olympics in Seoul, the first Olympics to be held in Korea?

If the Seoul Olympics led to increased awareness about the Republic of Korea on the international stage, the 2013 Special Olympics will enable Korea to position itself among leading countries in terms of welfare policies.