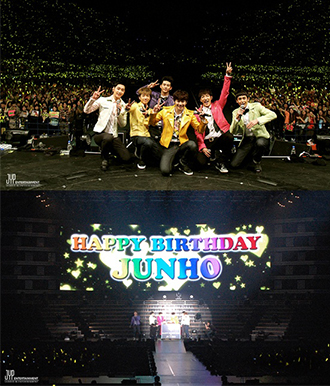 2PM’s Junho was in for a surprise when his band members conspired with fans to present him with a cake on stage at their “Legend of 2PM” tour in Nagoya.

During the final show on Jan. 25, 2PM members and fans sang Junho a song and hosted his 23rd birthday party, complete with flashes of yellow from some 10,000 torches which symbolized the band.

The band put on a quite a show, and had the 10,000-strong audience singing along in Korean, in perfect sync with the group.

After two days in Nagoya, the band moved on to Osaka for a show from Jan. 28-30.
In April, the band will perform for 11,000 fans over two days at the Tokyo Dome.