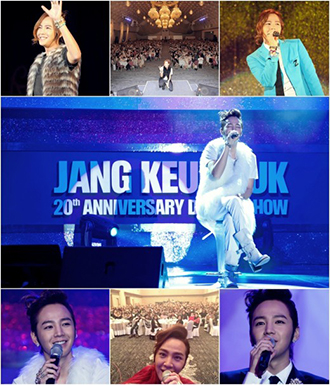 Jang Keun-suk’s dinner show, one of the many festivities the Prince of Asia put on to mark his 20th year in the industry, has come to an end in Tokyo on Jan. 24.
The sit-down fan meet event kicked off in Korea last month and after meeting with 900 fans, Jang moved the fanfare across the sea to Japan where he met with 20,000 fans in Osaka and Tokyo.

Unlike his sold-out Korean show, where fans purchased tickets, his Japanese fans faced some stiff competition: those in attendance were picked from a lucky draw.

During the dinner talk show, Jang reminisced about his time in the industry, and unveiled some video clips from childhood.

In addition, as a gesture of thanks, Jang even got down on his knee and presented one special fan a rose.
Some fans could hardly contain their excitement and many shed tears at spending the night with Jang.