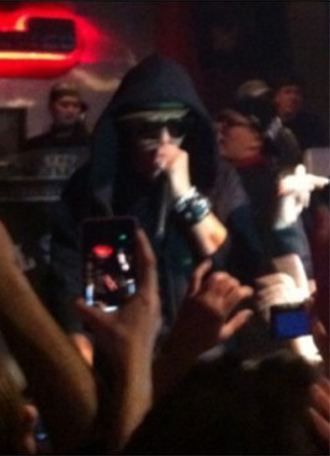 Fans of hip-hop trio Soul Dive were in for a treat on Jan. 26 when actor So Ji-sub made a surprise appearance at a club in Hongdae where the group was performing.

CJ E&M said that So went as a guest to show his support for the group that took part in his second EP “but then ended up on the stage.”

During the early hours So performed his new title track “Eraser” as well as his 2011 hit single “Pick-up Line.”

Soul Dive’s Knock-up Sean had recently raved about working with So through his official blog.
“At first I didn’t know how it’d go,” said the singer. “But he was full of ideas and proactive about the project,” said Knock-up Sean who said So was “indeed a pro.”
So’s album in which the group took part, was released Jan. 23.