No love lost between speedskating rivals

No love lost between speedskating rivals 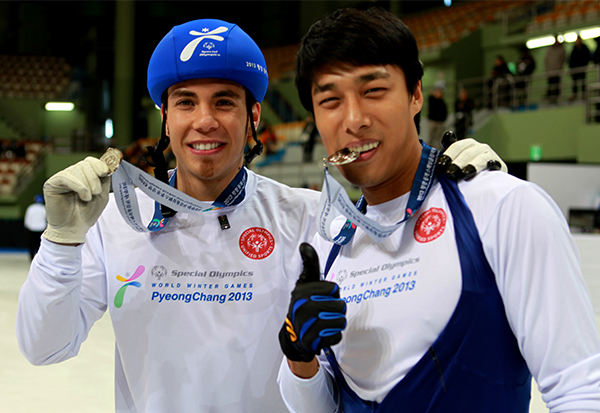 Kim Dong-sung, right, and Apollo Anton Ohno share a rare moment of amity in Gangneung on Saturday. Provided by the organizers


The bad blood going back 11 years between Kim Dong-sung and Apollo Anton Ohno had not faded when the two Olympic short-track speedskating stars met again in Gangneung on Saturday.

On Saturday, they were paired with athletes with intellectual disabilities to compete in a friendly short-track 1,600-meter relay event at the Gangneung Indoor Ice Rink.

The two belonged to different groups and thus never competed against each other, but Kim was obviously mindful of Ohno. As he was skating behind another retired Korean short-track athlete, Sung Si-bak, the 2010 Olympic silver medalist, Kim raised his hand in a show of surprise as if he were protesting a foul by Sung, apparently to re-enact the same gesture by Ohno that led Kim to be stripped of another Olympic gold in 2002.

“I came to Gangneung for the Special Olympics, not to meet Ohno,” Kim was quoted as saying by an official of the Korea Sports Association for the Disabled.

Kim, the 2002 world champion, finished first in the 1,500-meter final at the 2002 Salt Lake City Winter Olympics, but was disqualified after officials judged (based on Ohno’s gesture, many believe) that Kim blocked the American star as Kim was overtaking him in the final lap. Kim has never accepted the decision. Korean fans have supported him, often citing a video replay of the competition that Koreans say only confirms a deliberate overreaction by the American. Ohno remains one of the most reviled athletes in the world for Koreans.

Korean fans later felt insult was added to injury when, in his autobiography, Ohno claimed that Kim had come to him once and said that the American was a better athlete than him. Kim has denied the conversation ever happened.

The two have never reconciled despite frequent meetings in competition and at other events. In Gangneung, which marks their first reunion in three years, Kim greeted Ohno only with his eyes, not speaking with him at all. They posed for photos during the event and Ohno wrapped his arm around Kim’s shoulder in a friendly gesture. The move did not appear to thaw the ice, however.

Kim managed to fire off another barb at his rival when he told a reporter that Ohno appeared to have gained weight since the last time he had seen him, saying the American surely would have lost to him if they had competed against one another in Gangneung.

“I don’t see anything special about the situation with Ohno,” Kim said.

“If he apologizes from the heart, I’m willing to accept it.”