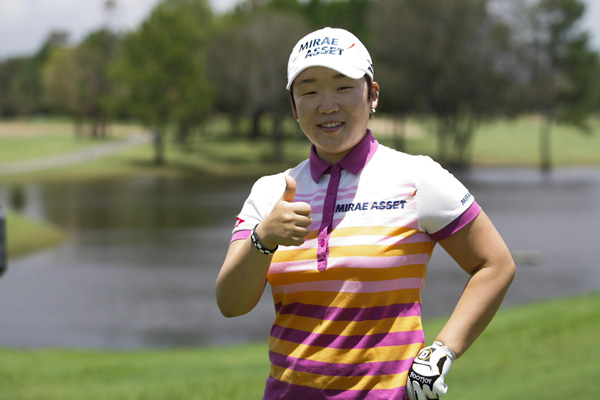 Shin mixed three birdies with two bogeys in a final-round showdown with New Zealand’s Ko and Tseng of Taiwan, and added the Australian title to her two British Opens among 37 professional victories.

Ko’s share of the lead evaporated quickly when she began the final day with a double bogey and bogey. However, the 15-year-old who was born in Korea and is based Down Under fought back to reclaim the joint lead after 13 holes before Shin dismissed the challenge.

Shin effectively clinched her victory on the 14th hole when, tied with Ko at 16-under, she holed an incredible pitch from deep rough behind an advertising billboard to make birdie.

“There are so many good players here, so I’m really happy to have played well. I can’t explain at the moment. I just feel excited.”

It was Shin’s 11th career victory on the LPGA and the first win in five months since winning the British Open in September.

With the victory, the 24-year-old has put herself in a good position to realize a goal that she set out before the season started, which is to become the first Korean to win the LPGA Player of the Year.

In 2009, she has narrowly missed a chance to realize that feat, coming in as runner-up to former World No. 1 Lorena Ochoa of Mexico.

The Koreans on the tour have gotten off to a great start this year, and fans have high hopes for a repeat of their record.

So far, the country’s winningest season is 2009, when Koreans and ethnic Koreans got a combined 12 victories. There are 28 more events left in this season.

Yoo Sun-young brought Korea its first LPGA win of last season in the sixth competition, April’s Kraft Nabisco Championship. That opened the floodgates for the country, which took home nine victories, or a third of the 27 competitions. The major victories last year also included Choi Na-yeon’s win of her first major title by four shots at the U.S. Women’s Open in Kohler, Wisconsin, in July.

Ko finished three-over for the day and 14-under for the tournament, in outright third place. She was trying for back-to-back wins in professional tournaments after winning last week’s New Zealand Women’s Open.

In January 2012, at 14, she won the New South Wales Open, becoming the youngest ever winner, male or female, of a professional golf tournament. Then, seven months later, at the age of 15 and 4 months, she became the youngest amateur to win an LPGA event at the Canadian Women’s Open.

That lowered the previous record by a whopping 15 months. Before her, American Lexi Thompson, 18, was the title holder with her win of the Navistar LPGA Classic in September 2011 at the age of 16 years and 7 months.

Ko struggled to overcome a poor start Sunday and was never able to comfortably settle into her final round.

“I had a few struggles with my drives but, I can’t play good every single round,” Ko said.

“Third in a professional event is a pretty good result, and I can’t say I’m not fully pleased.”

Meanwhile, Tseng shot the best round of the last day - a seven-under 66 - to dash past Ko into second place, two shots behind Shin.

“I was always feeling good here and I tried my best today,” Tseng said.