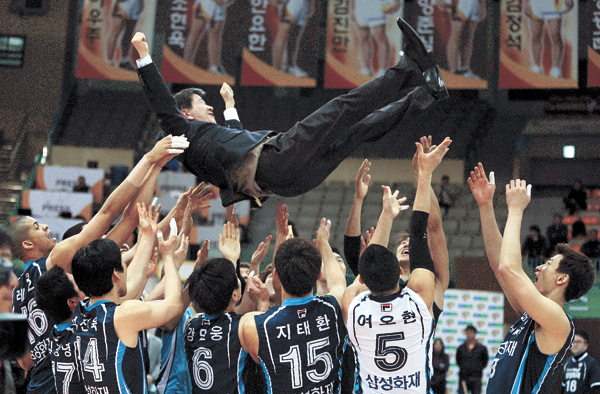 Samsung Blue Fangs players toss manager Shin Chi-yong in the air in celebration of winning the regular season after they defeated Kepco 3-1 in Suwon, Gyeonggi, on Saturday. [NEWSIS]

The Samsung Blue Fangs secured a second straight title as the regular season winner of Korea’s professional volleyball league, the V-League, after it beat bottom-setter Kepco 3-1 (25-17, 22-25, 25-14, 25-19) on Saturday.

This marks the fifth time overall that the Blue Fangs won the regular season. As of yesterday, Samsung was 15 points clear of second-place Hyundai Capital Skywalkers, who have only four games left.

The Blue Fangs will play against the winner of the playoff between the second- and third-place teams beginning March 24. The Samsung club has reached the champion-decider stage for the ninth time. It will aim to win its seventh championship title overall and its sixth straight one.

Samsung hoarded 62 points from 25 games this season, losing only three games en route. (The V-League gives two points - not three - to a team that wins a game 3-2. A losing team also gets 1 point from a 3-2 loss.)

Blue Fangs manager Shin Chi-yong, however, said that winning the regular season was not all that easy.

“Our roster is not that deep,” Shin told reporters after Saturday’s game.

“In the past, when we had Shin Jin-shik and Kim Se-jin, I didn’t worry even when we were losing,” Shin said, referring to the two retired Korean volleyball stars who led the Blue Fangs in the late 1990s and early 2000s.

“But, these days, it is important to hold out. If we collapse, we can lose two or three games in a row. I have tried not to suffer straight losses,” he said.

Samsung has not lost two games in a row this season and never relinquished its leading position.

Captain Ko Hee-jin gave credit to Shin, saying the players only had to execute the tactics drafted by the manager.

The Blue Fangs have five games to play before the regular season wraps up. Shin said that he will use the remaining time as preparation for the championship event.

Martinez, a six-foot-seven Cuban who is better known in Korea as Leo, has been a particularly important asset for the Blue Fangs.