Team Korea must regroup after drubbing

Team Korea must regroup after drubbing 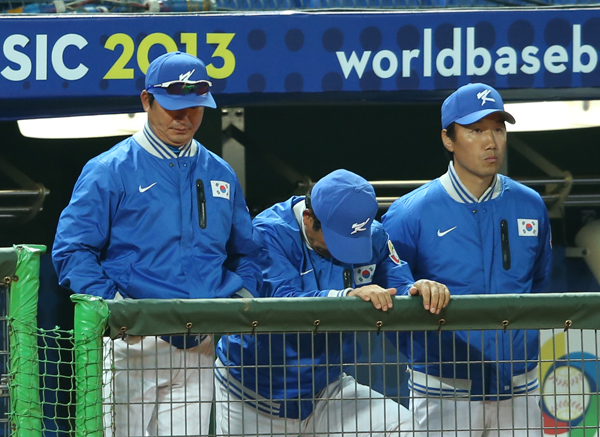 Team Korea manager Ryu Joong-il, left, and his coaching staff hang their heads near the end of the team’s first game in the 2013 World Baseball Classic. The Netherlands shut out Korea, 5-0, at Taichung Intercontinental Baseball Stadium in Taiwan. By Lee Ho-hyung

All Team Korea manager Ryu Joong-il could do was promise to win the remaining two games after lackluster batting, mediocre pitching and a porous defense ended in a humiliating 5-0 thrashing at the hands of the Netherlands Saturday in the squad’s first game of the World Baseball Classic.

Starter Yoon Suk-min allowed two runs on four hits and a walk over 4 1/3 innings before being relieved by Noh Kyung-eun with a runner on first and one out in the fifth. Noh responded by yielding another run on two hits and a walk in an inning of work.

The 2009 runners-up also committed four errors and were able to muster only four hits.

Ryu called it the worst-ever performance by the team, which had two victories against three losses and a tie in the exhibition games.

“Defense was not good, the second pitcher who was in a good condition performed bad, everything didn’t work out,” Ryu said at the Taichung Intercontinental Baseball Stadium in Taiwan.

“We will go back to work with a practice tomorrow and try to surely win the remaining games against Australia and Taiwan.”

Korea will play Australia at 7:30 p.m. Korean time today and Taiwan tomorrow night as it seeks one of the two second-round berths allocated to four-team Pool B.

Ryu, who had vowed to win all three first-round games, said the loss against the Dutch team was particularly painful.

In the top of the seventh, Lee Dae-ho got a leadoff walk, and Kim Hyun-soo singled. Lee reached third on Lee Jin-young’s groundout, but catcher Kang Min-ho and pinch hitter Lee Seung-yeop struck out to end the inning.

Korea squandered another opportunity in the fourth when Lee Yong-kyu walked with one out and Kim Tae-kyun with singles. Lee Dae-ho sent Lee Yong-kyu to the third base with a sacrifice fly before Kim Hyun-soo grounded out to end the threat.

In the sixth, Choi Jeong led off with a single, but Jeong Keun-woo hit into a double play.

Dutch starter Diegomar Markwell held Korea to two hits over four innings and was followed by Orlando Yntema, who allowed two over three innings. Of the seven pitchers who took the mound for Korea, closer Oh Seung-hwan was the only bright spot as he struck out two with runners at second and third in the eighth.

Korea’s record against the Netherlands fell to three victories against seven losses. It is the fourth-consecutive loss to Dutch amateur and professional teams, starting with a 4-2 defeat in the 2009 Baseball World Cup.

“Things can turn around in one day,” Ryu said, referring to the two Pool B competitions. “We will do our best with training tomorrow.”

It was the second shutout for Korea at the WBC after it lost 6-0 to Japan in the semifinals in 2006.

Kim In-sik, who managed Korea in the first two WBCs, told the Ilgan Sports that Ryu players need to put Saturday’s defeat behind them, just like his team did in the previous World Baseball Classic in 2009. Korea lost to Japan 14-2 in the first round, then bounced back to shut out China 14-0 and get revenge against Japan with a 1-0 victory to advance to the second round and then on to the finals.

Meanwhile, former major leaguer Park Chan-ho made his debut as a full-time commentator at JTBC, the exclusive broadcaster of the WBC, providing advice based on his own experience, during the Saturday’s game between Korea and the Netherlands.

He said the anxiety that he felt from his debut as a broadcaster was made worse added by the struggling Korean pitchers on the mound against the Dutch team.