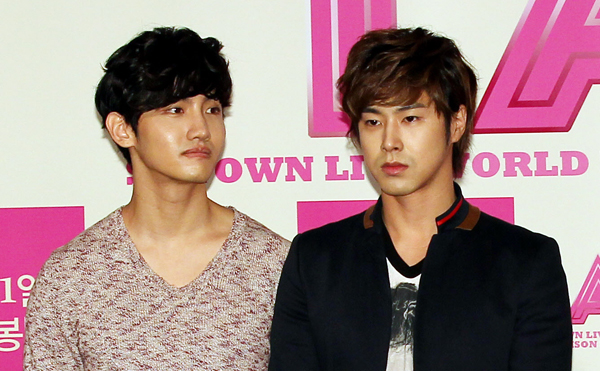 The boys of TVXQ tackled the difficult task of eating some cake whilst pretending to be journalists on the set of “Saki,” a Japanese drama.
According to Sankei Sports, Changmin and Yunho visited the set of the Fuji TV program, about a nurse who brings bad luck to men who fall for her.

Because in the program Saki sings TVXQ’s song “Catch Me,” the duo decided to pay her a visit.
Whilst there, at the prompting of the show’s director, the two took on the cameo role of journalists.
The Japanese paper said that the two thought the stint was a piece of cake and said they’d like to try eating Japanese food on-screen next time.

With acting down, the duo is looking to release its new Japanese album, titled “Time,” on March 6.