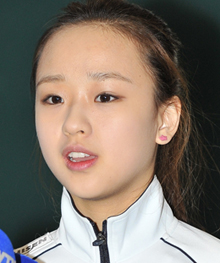 Son Yeon-jae yesterday expressed satisfaction with a bronze medal performance in the Korean rhythmic gymnast’s weakest discipline, the clubs, in her first international competition of the season.

“I’m happy I got results with the clubs earlier than I expected,” the 18-year-old told a media briefing in Incheon upon arriving back from the Grand-Prix Moscow 2013 on Sunday.

Son made several mistakes with the clubs at the 2012 London Olympics, where she finished fifth in the All-Around final. It was still the best performance ever by a Korean rhythmic gymnast on the Olympic stage.

In the Clubs Final in Moscow, she received 16,533 points. That outdid her Ribbon Final performance on Sunday, when she settled for sixth with 16,233 points.

Son said that she was nervous on Saturday because it was her first international competition since London. She expressed confidence about the season ahead. She is eying the Summer Universiade to be held in Russia in July and the World Rhythmic Gymnastics Championships in Ukraine in August, among other international events.