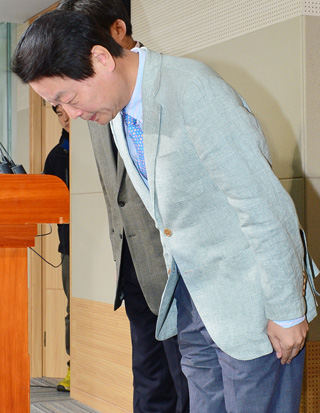 Han Sun-kyo, the commissioner of the Korean Basketball League, bows in apology for an alleged match-fixing scandal at a press conference at the KBL headquarters in Nonhyeon-dong, southern Seoul, yesterday. [NEWSIS]

His remark came a day after the court issued an arrest warrant for Kang Dong-hee, a star player turned manager, who is suspected of being involved in fixing four KBL games two years ago.

Kang, 46, has claimed innocence, but yesterday he tendered his resignation as the head coach of the Wonju Dongbu Promy taking responsibility for causing trouble to the public, the club said. The Promy accepted it.

“With regard to the arrest of coach Kang, the KBL deeply apologizes to fans who love professional basketball,” Han said at a press conference he called at the KBL headquarters in Nonhyeon-dong, southern Seoul.

“The KBL is in the biggest crisis since its launch in 1997 and we are actively cooperating with the prosecution for the investigation.

“We will be reborn as a credible KBL through the strenuous efforts.”

According to the Uijeongbu prosecution handling the case, Kang intentionally threw four Dongbu games during the 2010-2011 season in February and March 2011 after receiving 47 million won ($42,883) from two brokers.

Kang was summoned by the prosecution for questioning on March 2.

The allegation surprised many in Korea who remember Kang as a household name.

Kang has been the country’s best point guard since he played for Chung Ang University and then a corporate team run by Kia Motors.

It was also the first time the Korean professional basketball has been embroiled in match-fixing, though it has tarnished other major professional sports in the country, such as football, baseball and volleyball.

During the press conference, Han said that he and other KBL officials still see Kang as the accused, not as a criminal, citing Kang’s strong denial of the charge. But, he said that the league is considering permanent expelling Kang as a penalty if the prosecution claims turns out true.

He said the league will overhaul the rules to help prevent match-fixing from occurring, such as revising the drafting system.

Currently, the 10-team league gives the four bottom teams that do not make it to the playoff the right to draft new players first in the next season.

That rule has long triggered speculation that the mid-ranking teams are trying to lose toward the end of the regular season each year to get higher draft picks.

Han said that the league will give equal draft rights to all of the teams, except for the winner and the runner-up, beginning next season.

The Promy currently is not suspected of playing a role in Kang’s alleged match-fixing. The Promy finished fourth in the 2010-11 regular season and finished runner-up in the 2010-11 playoffs.

“We didn’t have any reason to lose a game,” an official of the Promy told the Korea JoongAng Daily. The official declined to comment, saying that the team will wait for the results of the prosecution investigation.

The Uijeongbu District Court in Gyeonggi issued a warrant to detain Kang on late Monday night and immediately detained him at a Uijeongbu prison, citing a risk of evidence destruction.