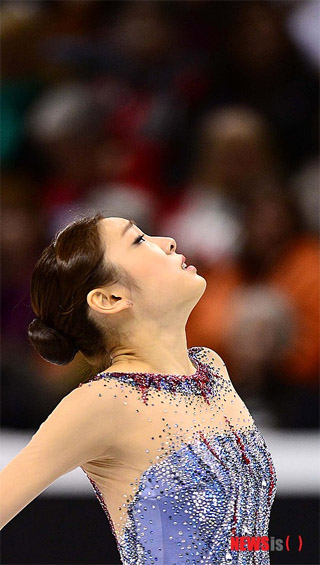 LONDON, Ontario - It was as if Kim Yu-na had never been away.

The Olympic champion made a triumphant return to the World Figure Skating Championships on Thursday, winning the short program in her usual commanding fashion. There were no signs of nerves and certainly no signs of rust in her first major competition since the 2011 worlds. Just the hint of more gold in her future.

With a score of 69.97, she's more than three points ahead of defending world champion Carolina Kostner (66.86) and Kanako Murakami of Japan (66.64) going into Saturday's free skate.

"When I first heard the score, I was a little bit surprised," Kim said. "My first thought was probably the spin wasn't good enough, maybe I got a downgrade for that. But that wasn't the case. Yes, I was a little surprised. But I know I tried my best so I have no regrets."

Nor should she. Only two other active skaters have scored higher in their entire careers than Kim did, one being longtime rival Mao Asada at last month's Four Continents (74.49).

But Asada couldn't duplicate that Thursday. Though she landed her trademark triple axel - judges gave it to her even though replays showed it clearly was two-footed - she's in sixth after botching her jump combination and popping her triple loop into a single. That leaves her one spot behind U.S. champion Ashley Wagner, who played it safe and didn't try her new triple-triple combination.

"Mr. Nicks told me if it doesn't feel right, don't risk it," Wagner said, referring to coach John Nicks. "I would rather play it safe than sorry.

The landing on the flip wasn't exactly how I wanted it. At an event this huge and this important, my focus is to get the three spots back and I figured playing it safe with a triple-double of quality was the better way to go."
With Gracie Gold in ninth, the Americans are in good position to regain a third spot for next year's Sochi Olympics. Wagner and Gold need a combined final placement of 13 or better - fifth and eight, say - and there is room for both to move up in Saturday's free skate.

"It's almost a personal agenda," Wagner said. "I want that third spot back. We've been trying for too long to get it back."

No female skater had a run quite like Kim did from 2009 through the Vancouver Olympics. She won all but one competition, usually in breathtaking fashion. And she did it while carrying the hopes of an entire nation, too. South Korea had never won an Olympic medal, let alone gold, in a sport other than speedskating at the Winter Games, and "Queen Yu-na" was treated like royalty.
But she handled the expectations flawlessly, coming as close to perfection in Vancouver as anyone ever has. The records she set in the short program, free skate and overall score still stand, with no one even coming close.

"After the Olympics, I felt empty because I had achieved my goal," Kim said.

After competing at the 2010 and 2011 world championships, where she was second both times, she decided to take a break. After spending most of the previous five years in Toronto and Los Angeles, she returned home. She skated in shows and helped Pyeongchang in its winning bid for the 2018 Winter

Olympics. While she didn't rule out Sochi, it didn't seem likely, either.

Then, last summer, she announced her return.
Comebacks in figure skating are notoriously harsh, and not even an Olympic gold medal can protect against gravity, injuries and the pace of progress. For every Evgeni Plushenko or Gordeeva and Grinkov, there are dozens more failures.

"It's really hard to prepare your physical and mental status," Kim acknowledged. "It wasn't an easy to decision to make, but I made it and now I'm just focused to be back."

Actually, it was like old times, right down to the sparkling crown earrings that twinkled in her ears.

What makes Kim so special is how smooth and effortless she makes everything look. Triple-triple jump combinations take so much strength and effort that you know when most women are going to do them because the lead-in is so lengthy. For Kim, her triple lutz-triple toe combo was simply another element, done as easily as another step or turn. She had an edge call on her triple flip, a minor flaw, but the jump itself was gorgeous as she floated in the air for the briefest of moments before starting to turn.

Even her landings were gorgeous. Rather than scratching the ice, she glided along like a pebble skipped across the water.

But just as it was in the old days, it was Kim's presentation that was particularly exquisite. She doesn't simply feel music, it's part of her soul. She acknowledged each nuance of music with every inch of her body: a soft tilt of her head, a brush of her fingertips and, of course, that penetrating gaze.

"Everything. Does that sound too broad?" Gold said when asked what she admired most about her idol's skating. "Her smoothness. ... That confidence. It just looks like she trusts herself so much, which is a lot (easier) said than done."

Her only "flaw" was with her spins. The first two got level threes, one below the maximum. Most skaters would have taken that gladly - she got positive grades of execution on both - but for Kim, perfection was, and still is, the norm.

"Other than that first spin, I felt great," Kim said. "Because I gave my best, I would give myself the full 100 percent."

Though Kostner fell on the second jump of her triple toe-triple toe combination, the rest of her program was dazzling. She got the maximum level fours on her footwork and two of her three spins.

"I am a little bit angry with myself. I fell on the combination which upset me a little bit," Kostner said. "I cannot say what happened there, it goes so fast. Otherwise I had a wonderful skate."

Murakami's ethereal program was flawless, right down to her sparkly, petal pink dress with a touch of bluish-grey on the skirt. Everything was done with lightness and ease, masking the difficulty of the tricks she was doing. But the judges noticed, awarding her the highest technical mark of the day.

"I feel like it's a little bit like a miracle," Murakami said. "I don't really want to think about the placement."
AP