How the super-rich in Korea live

How the super-rich in Korea live 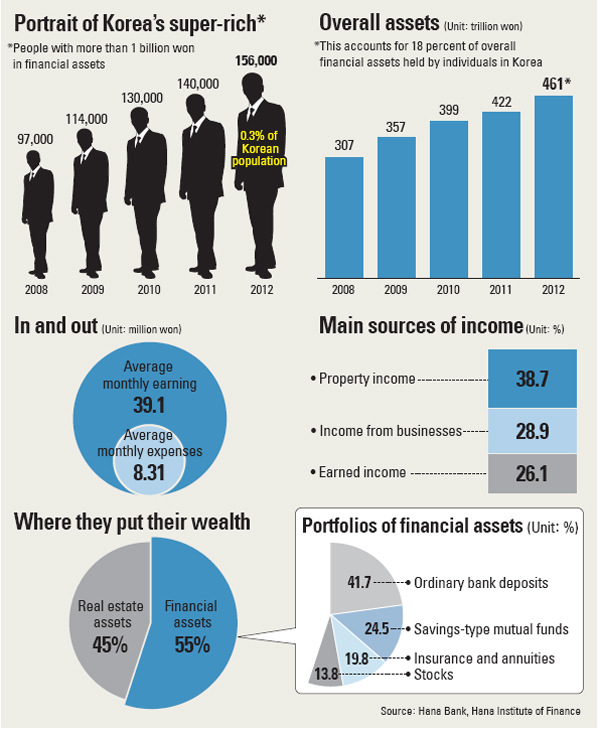 Mr. Lee, a successful entrepreneur is one of Korea’s super-rich, a tribe that is steadily growing.

His is cautious - a common characteristic of the super-rich.

“I’m managing my assets as safely as I can these days because I fear losing assets I want to transfer to my children if I make aggressive investments in such volatile market condition,” Lee said.

According to a 2013 Korea Wealth Report released by Hana Institute of Finance last week, there are 156,000 super-rich in Korea, which the institute defines as people with financial assets of more than 1 billion won. Taken together, the super-rich’s financial assets are estimated worth a combined 461 trillion won, and this does not include hard assets like property.

Although the 165,000 super-rich make up only 0.3 percent of the overall population in Korea, the report said they control 18 percent of overall household financial assets.

Nearly 40 percent of their income comes from property (38.7 percent), followed by income from businesses (28.9 percent) and earned income such as salaries, interest and dividends (26.1 percent).

In terms of where the super-rich put their assets, financial assets account for 55 percent and real estate assets for 45 percent.

The study showed many take conservative approaches to their portfolios of financial assets.

The ratio of ordinary bank deposits was highest among super-rich who have 1 billion to 3 billion won in financial assets at 46.1 percent and the ratio went down when the assets held increased.

“The rich become more active in financial investing after they put a certain portion of their safe assets in bank deposits,” said No Jin-ho, a research fellow at Hana Institute of Finance.

“Those who just joined the super-rich group tend to put a lot of their assets in banks,” he said, “because they want to withdraw the money at any time they find an investment opportunity, such as buying real estate that’s on sale at a reasonable price.”

“Many wealthy people try to restrict the amount of real estate in their portfolio because most of them think the [frozen] market will be flat for a while,” said Kim Won-ki, a senior banker at Shinhan Bank’s Dogok branch, which is located in affluent southern Seoul. “But when it comes to passing along their wealth to their children, they pick real estate property as their favorite option.”

After retirement, they prefer to live in areas with hospitals, department stores, cultural centers and good transportation.

Meanwhile, nearly 91 percent of respondents said they will live independently from their children.