Ryu solid but unspectacular in debut

Ryu solid but unspectacular in debut 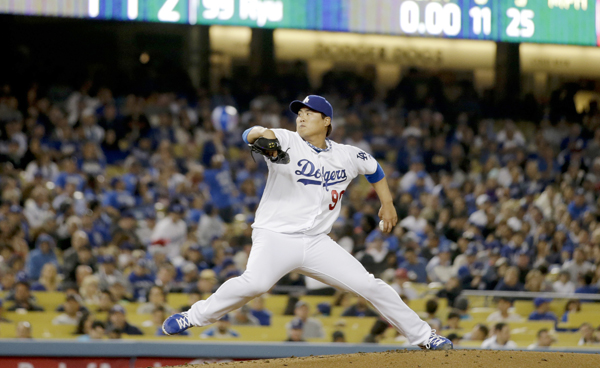 Bumgarner (1-0) struck out six and walked none in the second straight gem at Dodger Stadium. Clayton Kershaw homered and pitched a four-hit shutout in the Dodgers’ 4-0 victory on opening day Monday.

The only hits off Bumgarner were doubles by Andre Ethier and A.J. Ellis.

Sergio Romo worked a perfect ninth to earn his first save of the season.

Bumgarner is 5-1 with a 1.94 ERA in six starts against the Dodgers since May 19, 2011. He pitched eight scoreless innings for the second straight time against the Giants’ biggest rival.

“That’s probably the best stuff I’ve had in a long time, which is odd because things don’t work out too good in the first start of the year,” he said. “Really, the first month of the year has usually been kind of tough to get it going. But it feels good to get started on a good note.”

Ryu’s debut helped draw 45,431 fans to see the left-hander who signed a $36 million, six-year deal with the team in December, making him the first player to go directly from the Korea Baseball Organization to the U.S. major leagues.

Ryu (0-1) gave up three runs - one earned - and 10 hits in 6 and a third innings. He struck out five, walked none and threw 80 pitches. After he made his first pitch, the ball was taken out of play to mark the occasion.

“Their hitters were pretty aggressive in the early part of at-bats,” Ryu said through a translator. “I couldn’t really get my timing.”

The defending World Series champion Giants took a 3-0 lead in the seventh with two unearned runs. Ronald Belisario relieved Ryu with one out and runners at second and third. The infield was pulled in for Bumgarner, who hit a grounder to shortstop.

Justin Sellers, playing in place of the injured Hanley Ramirez, charged the ball and made a hurried throw past catcher Ellis for his second error of the inning. That allowed Andres Torres to score behind Joaquin Arias - who reached on Sellers’ first throwing error.

Bumgarner didn’t challenge as many batters because it was such a low-scoring game.

“I felt like I was careful and tried to make pitches and keep the ball out of the middle as much as I could,” he said. “The defense did a great job, too, so it was a 100 percent team effort.”

The game was televised live in Korea, where it began at 11 a.m. local time on Wednesday.

“I wish the outcome could have been better, but I’ll just go back and keep fighting,” Ryu said. “I definitely felt the pressure. It was the first time I felt that in a very long time.”

He got just two flyouts and worked hard to get out of other jams. The Dodgers’ defense helped him, too, turning three double plays. He retired the side in the sixth.

“He induced some ground balls and got some big double plays to stop some rallies, but the guys kept grinding and got it done,” Giants manager Bruce Bochy said.

Mattingly came to the mound with a translator after Ryu allowed consecutive hits to open the seventh. After a brief conversation, Ryu responded by getting Torres to ground out. However, Mattingly immediately returned to remove him and Ryu walked off the field to loud applause.

The crowd booed when Ryu didn’t run out a grounder in the sixth. Pitchers don’t hit in Korea.

“It was embarrassing and I feel I should apologize for that,” Ryu said. “That was actually my mistake. Now I know I have to run a lot harder. I learned my lesson.”

Ryu had already pitched at Dodger Stadium during the 2009 World Baseball Classic, when Korea won a silver medal.