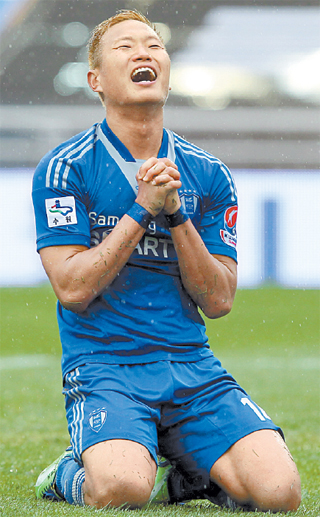 North Korean striker Jong Tae-se ended a goal drought dating back to his fruitless Bundesliga stint on Saturday, helping the Suwon Bluewings spring to the top of the K-League Classic.

The Bluewings beat Daegu FC with three goals at Suwon World Cup Stadium, including the 29-year-old forward’s first of the season.

Jong joined the Bluewings in January after the once-promising Japan-born striker withered in his first overseas stint in Germany between 2010 and 2012. He failed to score in 10 appearances with FC Koln last year.

“To be frank, I was under a lot of pressure until now,” Jong said after the 3-1 victory over Daegu. “I did not sleep well. But the goal today will take some pressure off my chest to some extent.

“I think that will make a positive impact on the whole season.”

Jong, whose popularity in the South has long been established, was brought in reportedly at an annual salary of 300 million won ($265,000) on a three-year contract. He vowed to score at least 15 goals in his debut season in the K-League Classic, but he was scoreless in his first four games.

The former J-Leaguer was more embarrassed last Wednesday, when the Bluewings hosted J-League club Kashiwa Reysol for an Asian Football Confederation Champions League game. He missed two penalty shots and failed to score an offensive point as the Bluewings succumbed to the visitors, 6-2.

His goal chance finally came on Saturday as Seo Jung-jin sent Macedonian Pnctnk Stevica’s through pass toward the box, where Jong connected on a sliding right-footer in the 32nd minute.

Before the game, he said he would do a “Gangnam Style” horse dance if he scored. After the goal, instead, he knelt holding his hands over his chest as if praying. He was visibly emotional with tears welling up in his eyes.

“I waited for the first goal so long. So I did not have time to do a special goal ceremony,” Jong said. “I just fell down, and the tears continued coming out.”

Jong’s goal put Suwon on the scoreboard first. Daegu managed to tie with Eddy Bosnar’s own goal in the 43rd minute, but Seo gave Suwon another lead in the 46th minute, and Stevica added another goal in the 54th minute.

With the victory, the Bluewings leapfrogged the Pohang Steelers into the lead with 12 points after five games. The Steelers added only one point Saturday in a 1-1 draw with Incheon United.

“I am looking ahead rather than at the present,” said Suwon coach Seo Jung-won. “I expect the win today will provide further momentum for our team.”

The Jeonbuk Motors ended a two-game winless streak with a 2-1 victory over Jeju United on Saturday, moving into fourth place, within two points of the Bluewings.

Midfielder Enio Oliveira Junior, who scored one in Motor’s 3-1 win over Japan’s Urawa Red Diamonds last week during an AFC Champions League game, gave Jeonbuk a 1-0 lead in the 32nd minute. Pedro leveled for Jeju, but midfielder Seo Sang-min scored the winner in the 86th minute.

Jeonbuk acting coach Fabio said strikers such as Lee Dong-gook and Kevin Oris are executing well his order to share chances with midfielders. Lee, who scored one and set up the other two goals against the Red Diamonds, also set up Enio Oliveira Junior’s goal against Jeju.

Defending champion FC Seoul remained winless five games into the new season as it was held to a 2-2 draw by Ulsan Hyundai on Saturday.

Colombian midfielder Mauricio Alejandro Molina Urive, or Molina, and his “Demolition Duo” partner Dejan Damjanovic scored one apiece for Seoul in the first half, giving Seoul a 2-0 lead. But Japanese midfielder Masuda Chikashi reduced the deficit for Ulsan with a midrange shot in the 37th minute, which found its way to the net after being deflected by Ulsan forward Kim Seung-yong. Ulsan defender Kim Chi-gon headed a free kick by Han Sang-woon for an equalizer.