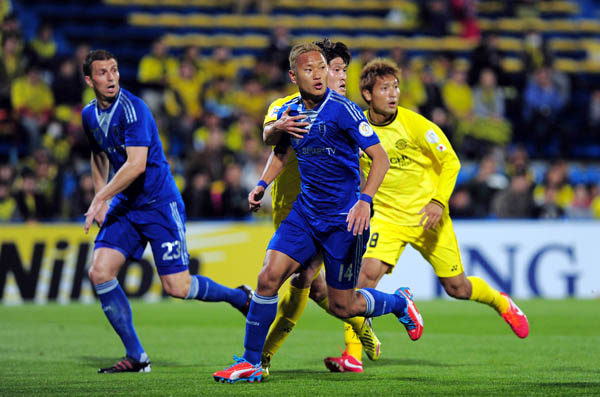 Seo Sang-min scored a last-minute equalizer, and the Jeonbuk Motors secured a point with a 2-2 draw with the Urawa Red Diamonds in a return match of the Asian Football Confederation Champions League on Tuesday in Jeonju, North Jeolla.

Urawa, which blew a lead in a 3-1 loss during a home match against Jeonbuk in Saitama last Wednesday, started strong again at the Jeonju World Cup Stadium with Daisuke Nasu and Tsukasa Umesaki putting the Japanese side two goals up only seven minutes into the game.

Urawa maintained a 2-0 lead until the 51st minute, when Enio Oliveira Junior picked up a deflected cross outside the box and turned it into a lobbing goal that caught Japanese goalkeeper Nobuhiro Kato off guard.

The Brazilian midfielder missed out on another goal chance in the 67th, hitting the ball onto the goal post, the third time the Motors did that in the game.

A minute into the second stoppage time, Jeonbuk got a last chance to pull back with Leonardo Rodrigues Pereira’s cross from the left midfield being deflected onto Lee Dong-gook’s feet inside a crowded box. Lee, sandwiched between two defenders, tapped the ball behind him and a charging Seo, a 26-year-old midfielder, converted it into a powerful left-footer that flew into the rear left side of the net.

It was Lee’s fourth assist in three games, including two in the previous match against Urawa.

“It is good to see the opportunities being created due to a defense against me,” Lee, a 33-year-old striker who is the league’s all-time leading scorer, told the team’s Web site. “I felt once again that only when I am a devoted team player, I can create a chance for the team.”

The Motors acting coach, Fabio, who vowed to make his team’s defense more stingy, said after Tuesday’s game that he wants to take back those words. The Motors allowed six goals in four ACL games and six goals in the five K-League Classic matches.

“I wonder when we could win a game without allowing a goal,” he told reporters.

Jeonbuk is second in Group F with six points, two points ahead of Urawa.

The Suwon Bluewings dropped to the bottom of the table in Group H after continuing its winless streak with a scoreless draw with the Kashiwa Reysol on Tuesday in Japan. Suwon has only two games left. The two best teams in each group will advance to the Round of 16.