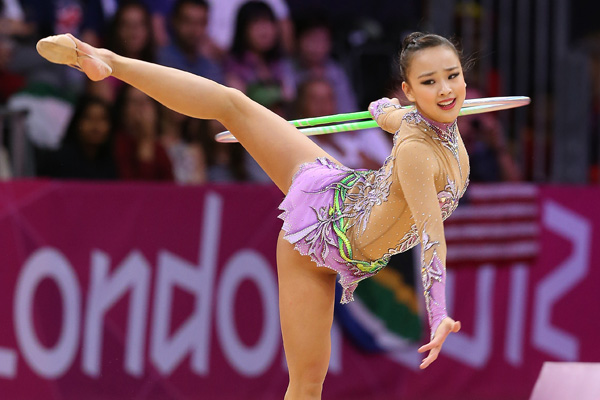 Son Yeon-jae won a bronze medal with a hoop performance at the Rhythmic Gymnastics World Cup in Sofia, Bulgaria, Sunday, the third consecutive time she has won a World Cup medal.

Son received 17.800 points at the hoop final, behind Yana Kudryavtseva of Russia (18.250) and Silviya Miteva of Bulgaria (17.950). Ganna Rizatdinova of Ukraine tied Son for third place.

It was Son’s third-straight medal since she scored a bronze finish with the ball during the World Cup held in Lisbon, Portugal, early last month, her first-ever World Cup medal with the ball performance. In the previous World Cup in Pesaro, Italy, on April 28, she won a silver medal in the ribbon finals, her best result at an individual discipline of a World Cup.

She raised hopes for a better performance in Sofia as she qualified for all four apparatus finals, the first time she did that in a Category-A World Cup. During Saturday’s qualifications, Son received the highest number of points among the 21 competitors in hoop with 17.800.

However, she failed to score a podium finish in the other three disciplines in Sofia.

She finished last in the ball final with 16.200 points, compared with 18.150 points for the winner, Margarita Mamun of Russia. In the club final, she received 17.100 points, the second-lowest score. In the ribbon final, she tied with Marina Durunda of Azerbaijan for fifth place with 17.400 points.

Son also won a bronze medal during the Sofia World Cup last year, that time with a ribbon performance.

On Sunday, Son made several mistakes in the ball and clubs finals.

“Yeon-jae has a good command of techniques and her performance is graceful, but sometimes, it is necessary to make a powerful impression,” Cha said. “She needs to gain more muscle strength.”

“If I make up for it physically, I expect that I would be able to have a better result before the world championships,” Son said.

She will return to Korea today to compete in the national team qualifier slated to be held on Friday.

Another Korean gymnast, Chun Song-e, finished last in the individual all-around on Saturday.